Ballyhooed transfer says last year's struggles are behind her

Shaquina Mosley sparkled in her first game in a Kansas University basketball uniform. Mosley was also splendid in the Jayhawks' season finale.

Then there were the 28 games between the opener and the final contest of the 2005-06 season. Mosley was no factor in any of them.

In fact, if the Big 12 Conference awarded a Flop of the Year Award, Mosley would have won in a landslide. The 5-foot-6 guard simply couldn't make the adjustment from the junior college level to the individual expectations at the higher echelon.

"I let the mental aspect get to me much more than the physical aspect," Mosley said.

Mosley came to Lawrence with a dazzling reputation. She had been named national junior college player of the year after helping guide Central Arizona CC to the NJCAA championship.

Big 12 coaches, well aware of her success at the Arizona two-year school, anointed Mosley the preseason newcomer of the year.

Then in the Jayhawks' season opener against Binghamton, Mosley turned in a solid all-around performance with 10 points, eight assists, four rebounds and two steals.

But just two games later, she had lost her starting job.

Basketball had come easily to Mosley in junior college. It wasn't that easy at KU. The practices were longer, the weight work time-consuming, the meetings more intense and the classwork tougher.

In the meantime, coach Bonnie Henrickson was harping on the necessity of day-to-day adherence to the program's agenda. 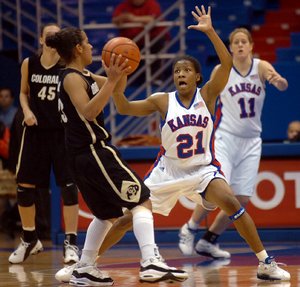 Shaquina Mosley brought a bulging portfolio to KU, but she rarely lived up to those expectations during her junior year with the Jayhawks.

Finally, in mid-February, Mosley's career reached its nadir when Henrickson suspended her for two games. She sat out the Feb. 15 game against Nebraska and the Feb. 18 contest against Iowa State.

"That was my lowest moment," Mosley said. "I wasn't allowed to be with the team. That was really a big wake-up call for me."

Mosley may have finally awakened, but it would be another month before she proved she had finally caught the drift.

In the Jayhawks' season-ending loss to Mississippi in the WNIT, Mosley scored a career-high 11 points, adding five assists, three rebounds and three steals.

Now Mosley wants to pick up where she left off, and Henrickson has wiped the slate clean. In fact, during the off-season, the KU coach asked Mosley to write on an erasable wallboard all the things she had done wrong last season.

"Basically, it was a short list," Mosley said. "The first thing I wrote was that I wasn't working as hard as I should. That was the big thing that stuck out for me." 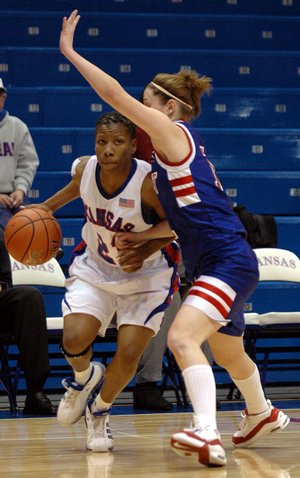 After Mosley was finished, Henrickson erased everything she had written and told the senior guard she was starting from scratch.

One of only two seniors on the roster - fourth-year player Sharita Smith is the other - Mosley is the quickest player on the KU roster, and one of the fastest. She also may have the most instinctive basketball skills.

Now Mosley plans to use her performance against Ole Miss as a stepping stone to a memorable college swan song.

"It clicked just before the WNIT," Mosley said. "I said, wow, I'm going to be a senior and have only one year left."

Henrickson reports Mosley has been more consistent, more solid in practice, but only time will tell if Mosley will revert to her old ways or be mentioned in the same sentence with the word comeback.

"I do feel a lot more comfortable," Mosley said. "I know exactly what Bonnie wants. I know what she expects."