Morningstar growing up - and out

Freshman wing has bulked up since his Free State High days

You can't sneak the sun past a rooster, and you can't slip a protein milkshake by Brady Morningstar.

"Every time I go into the locker room I drink one," Morningstar said.

Now a freshman basketball player at Kansas University, Morningstar continues to pursue the maturity he needs to become a viable NCAA Divison One performer.

"It's all about getting more physical," Morningstar said. "On the court, I'm not getting pushed around, but I'm still a lightweight."

Morningstar stands 6-foot-3 and weighs between 180 and 185 pounds, or about 15 to 20 pounds more than he weighed two years ago when he was named Sunflower League player of the year after leading Free State High to the conference championship.

During his senior year with the Firebirds, Morningstar could have passed for an eighth- or ninth-grader. He had pipestem arms, pencil legs and a baby face that belied his basketball acumen.

Because his body hadn't caught up with his basketball tools, Morningstar took the unusual step of enrolling at a prep school in New Hampshire last year. In that way, he figured, he could bulk up without losing a year of college eligibility.

While at New Hampton Academy, Morningstar averaged 22 points a game and earned his team's most valuable player award while playing the off-guard position. 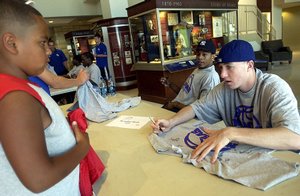 Brady Morningstar, at right has put on 15-20 pounds since his Free State High days, allowing him to hold his own in scrimmages.

"It helped me a ton," he said of his time in New England. "I would recommend it to anybody hoping to add an extra year of strength and to help with school work."

Morningstar did gain weight at the New Hampshire academy, although not necessarily because he never saw a protein shake he didn't like.

"Actually, I didn't like the taste of the shakes at prep school," Morningstar said with a smile, "so I just ate a lot. But I like the shakes here."

Morningstar also likes his chances of earning some court time this winter even though he's in a position where the KU cupboard is, if anything, overstocked.

"I'll be happy with any role," the former Firebird said. "I'm just going to play hard every day and try to earn a spot in the rotation."

Inevitably, because he is still maturing and because coach Bill Self boasts a stuffed larder, there will be speculation Morningstar should consider sitting out and waiting until 2007-08 to be listed as a freshman.

That's not part of the plan, however, in large part because he'll turn 21 in January.

"It's crossed my mind," Morningstar said about a possible red-shirt year. "But, as of right now, I don't think I'm going to take one."

Morningstar's father was a late-bloomer, too. When Roger Morningstar was a high schooler in Dundee, Ill., he wasn't regarded as a D-1 prospect so he went to junior college for two years before signing with the Jayhawks. 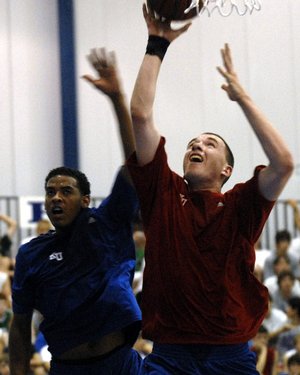 Brady Morningstar during a scrimmage.

"People come up to me and say, 'I watched your dad play 30 years ago,'" Brady said. "I also know they called him Goose, and a lot of my friends call me Goose because of it."

Brady is the youngest of Roger and Linda Morningstar's three children. Jamie, the oldest, is a former KU volleyball player while Lindsey is currently on the KU volleyball roster.

Born in Illinois more than a decade after his father graduated from KU, Brady spent a couple of years in the Boston area while his dad worked for Converse. Then his folks moved to Lawrence while he was in grade school, and he grew up in a city that lives and breathes basketball.

No question Morningstar could be a regular at an NCAA Div. II or an NAIA school, and perhaps even a mid-major. Yet dreams die hard.

"I can see myself playing at a smaller school," he said, "but I feel like I'm in a good situation here. I grew up in the town and I'm a KU fan."