Kaun to take prominent role inside

Native of Russia expects to be pushed by Jackson, Arthur

When Sasha Kaun went home for the summer, it became evident - sports fans in Lawrence vastly differ from the ones in his hometown of Tomsk, Russia.

"People don't look at basketball as a sport that much in Russia," the Kansas University junior center said. "The major sport is soccer there. The people don't know much about basketball."

Kaun went back to Russia to renew his passport and visit his family. He said some people in Tomsk, which has a population of about 500,000, recognize him as a KU basketball player. Others simply recognize his 6-foot-11, 245-pound frame.

"Some people just kind of look at me and say, 'That's a pretty tall guy,'" Kaun said. "I've never met anyone taller than me there."

Kaun said due to the limited basketball facilities in Tomsk, he mainly conditioned and lifted weights for the five to six weeks at home. He said now that he's back in Lawrence, he could work on more basketball-related aspects of his game.

"My post and down-low game, my offensive game, just going up to the ball and being more aggressive are the main areas," Kaun said about how he'd like to improve on the court.

Kaun started 29 of 33 games for the Jayhawks last season and averaged more than eight points and five rebounds per game. 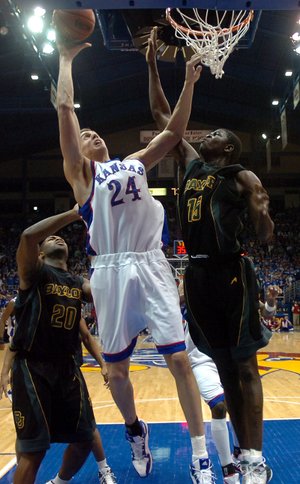 With junior center C.J. Giles removed from the team, Kaun will figure into the frontcourt mix even more this season once he returns from what was expected to be a three- to six-week stint nursing a partially torn patellar tendon. He will likely be part of a starting frontcourt that will include sophomore forward Julian Wright. Kansas possesses impressive depth at the post, with junior Darnell Jackson and freshman forward Darrell Arthur as well.

Although Kansas coach Bill Self hasn't set the starting rotation, Kaun admitted Arthur was a prospect who could see big-time minutes early in the season.

"I'm going to be working for it, for my position, definitely," Kaun said of starting. "It's really too early to say right now, because I don't know what the rotation is going to be like."

Regardless of the rotation Self puts on the floor, Kansas will have high expectations. The Jayhawks will return all of their starters from last season. Self said he talked to the team about expecations, but said it was considerably too early to talk about chances of visiting Atlanta, where the FInal Four will be held.

"Our goal is to have a really good week of practice," Self said. "And let's make sure we get in our halfcourt offense and halfcourt defense and get our secondary break in." 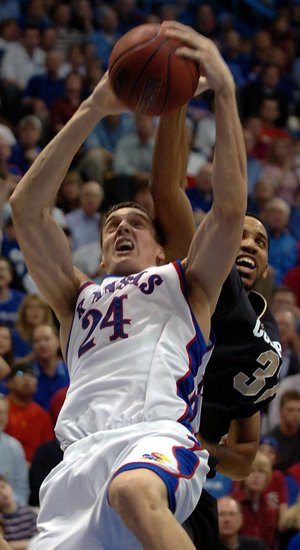 Sasha Kaun (24) pulls down a rebound.

While the team might not be looking ahead to the NCAA Tournament, it will certainly look to improve upon first-round exits the previous two seasons.

"We need to stay humble, stay focused and stay on the same page," Kaun said. "Just play hard and play together."

Kaun will expect to be a leader this season. He said athletes like junior guard Russell Robinson and freshman guard Sherron Collins would be the vocal leaders, while he would have a different leadership role.

"I'm going to try to be more of a quiet team leader, just by doing the right things," Kaun said. "I'm just not a big outspoken person, I guess. I hope people look at me and say, 'That's the right way to do it,' and just follow that."

Kaun said he'd like to take his game to the next level.

"I'd definitely want to play in the NBA," Kaun said. "The question is out there, it's just a matter of me working hard enough and getting myself to the next level."

Kaun did make one thought perfectly clear, though.

"I want to be here all four years," he said.

Nah, it really wasn't as funny as I'd hoped.