Kansas women to rely on rookies

During the Big 12 meetings, Kansas University women's basketball coach Bonnie Henrickson approached Texas University's Jody Conradt, who coached seven freshmen last year, for advice on how to handle her own class of septuplets.

Conradt, whose team finished 13-15 last year, looked at Henrickson and shook her head.

"Call three right now," Conradt said, "and tell them not to come."

"These kids bring a breath of fresh air," Henrickson said. "I love their energy."

As many as four could end up starting this season, and Henrickson does not foresee redshirting any of the seven freshmen.

Conradt is not the only person who advised Henrickson on coaching a youthful squad. KU men's coach Bill Self led his 2005-06 team to a 25-8 record despite six sophomores and four freshmen, and Henrickson picked his brain during their trip to Baltimore to meet with NCAA officials.

She has adopted Self's efficient practice model to help the freshmen focus better. Instead of one three-hour session, she will employ two-a-days with an hour and 15-minute morning session and a two-hour afternoon session.

Long practices may drain the young players mentally, but the freshmen could handle the physical toll. Henrickson said they represented the fittest group she has coached. 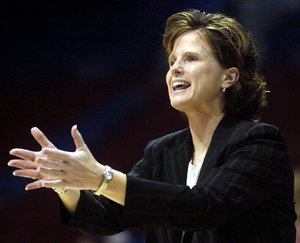 What, Bonnie worry? KU women's coach Bonnie Henrickson says her freshmen class is like a "breath of fresh air."

In particular she lauded the conditioning of Ballweg. The 5-foot-10 guard from Overland Park Aquinas has bounced back from a shoulder injury suffered during her senior season.

Ballweg racked up 157 three pointers - the most in Aquinas history - during high school. She can stroke it, but the KU coaching staff has worked with Ballweg on speeding up her release.

Feickert, 6-2, brings long-distance shooting but from the post position. The Goodrich, N.D., native is the one freshman player who is a sophomore. She earned 26 college credits during high school and has sophomore academic standing at KU.

The forward/center averaged 22 points, 15.5 rebounds, 4.25 blocks, 3.7 assists and 3.6 steals as a senior. The forward connected on 44 threes while shooting 50 percent from behind the arc and could display those skills from season's start.

While Ballweg and Feickert bring a deft shooting touch, 5-11 forward McCray, an Olathe East product, adds power. She totaled 553 rebounds in high school and can bench 215 pounds and power clean 200. 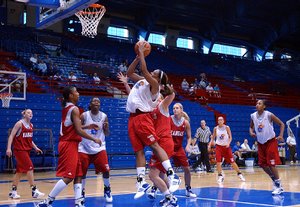 Kansas freshman forward Danielle McCray goes up for a shot during a recent scrimmage.

Dubbed by many recruiting outlets as the most talented player in KU's freshman class, McCray suffered shin splints during the offseason. Ankle swelling forced her to undergo compartment surgery Aug. 9 and miss four weeks of conditioning, but she has regained her full health.

"I'm back and doing everything in practice," McCray said.

"It's always just been me, my sister and my brother out back playing a game," Kohn said. "It all made me the athlete I am."

The athletic 5-9 point guard already has demonstrated signs that she can fulfill the role of floor leader.

"She doesn't mind walking up to somebody and saying, 'Listen, we're going to be better than that today,'" Henrickson said. "I like that."

Henrickson also has liked Jacobs, whom she deemed the team's most pleasant surprise thus far. The fact that KU landed Jacobs was a bit of surprise as well. A 5-10 guard from Mansfield, Texas, she originally committed to Texas Christian University, but TCU dropped its scholarship offer.

"Everything happens for a reason," Jacobs said. "It's big motivation to come here and do well and try and get a starting spot."

Indeed TCU's loss has served as KU's gain. Jacobs, first-team All-State her junior and senior seasons, has shown a knack for attacking the rim.

And what happens if KU plays TCU in postseason play this year?

"They're going down," Jacobs said, "no doubt about it."

Kansas nabbed another Texan as part of its recruiting haul. Porscha Weddington, a 6-1 forward from Temple, Texas, averaged 15.6 points and 6.6 rebounds last year.

Sade Morris, the Oklahoma Gatorade Player of the Year, has displayed those skills as well. She is 5-11, but her long arms allow her to disrupt the passing lanes on defense. Adept at making plays off the dribble, she can penetrate toward the basket or stick the midrange jumper.

"I can be a shooting guard," Morris said, "But also be that person that drives through the lane."