Rush lauds teammate, but games not same as H-O-R-S-E 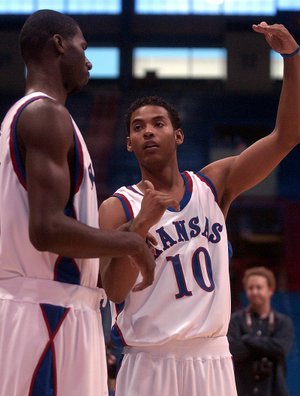 According to Brandon Rush, the best three-point shooter in the nation plays for the Kansas University men's basketball squad - but it's not he, it's Jeremy Case.

"If he started getting a lot of playing time, I think he'd be the best shooter in the nation," Rush said. "That's how great he can shoot."

Case was willing to be a little selfish in agreeing with Rush - but it was only to an extent.

"If I say we just go out there and play H-O-R-S-E, I'd say I can win," Case said. "But in the game, you see Brandon Rush shot almost 60 percent from the three-point line, so I'd have to go with him being the best shooter on the team - if we go by games. If we just go by just going out there and shooting, I'd say me."

While KU coach Bill Self says Rush embellishes a bit with his comments, he did agree that Case could be a dangerous shooter when on the court. 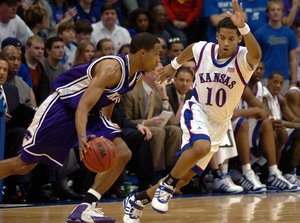 Known mostly for his shot, Jeremy Case also can play a little defense.

"I think Brandon means well - he can exaggerate from time to time in his opinions," Self said. "Jeremy is a very good shooter. He'll get the opportunity. He could be the perimeter player, the guy you play around many guys. He will have to make shots - he can shoot the ball."

In years past, Case has come off the bench to shoot a couple of threes - or a career-high four in the game last year against the University of New Orleans - but he'll be the first to tell you he needs to grow up in game situations. 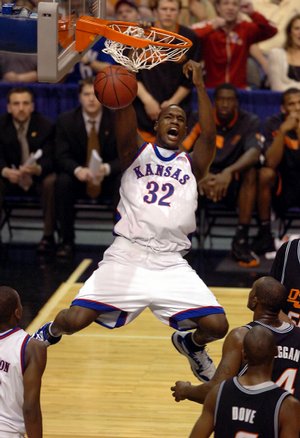 After sitting out an NCAA suspension, Darnell Jackson proved last season he can be a force inside.

"I'm always hitting the hot streaks," Case said. "But it's all about being in the flow. In practice, you're always in the flow. It's kind of hard to get into the game and be in the flow right away. ... But it's time for me to conquer that. I need to come out and be able to knock down shots right away."

Rush said Case was more than just a pure shooter, saying he had become a pure all-around player.

"I think he's a great player," Rush said. "He can create his own shot, he can play either the shooting guard or point guard position, and he can defend too - so that really helps a lot."

When walk-on Brad Witherspoon made his practice debut with the squad, Witherspoon said it was Case who was lending a helping hand with where to be during drills.