Kansas University women's basketball coach Bonnie Henrickson joked that several of her seven freshmen recruits did not play in the fourth quarter of their high school games, and it showed Wednesday.

A dominant first-half performance, however, fueled KU to an 80-55 victory against visiting Fort Hays State in each team's first exhibition game.

The Jayhawks began the game with a 46-point offensive onslaught before the Division II Tigers outscored the Jayhawks, 37-34, in the second half.

"We just lost intensity," KU freshman Sade Morris said. "That's something we've got to work on." 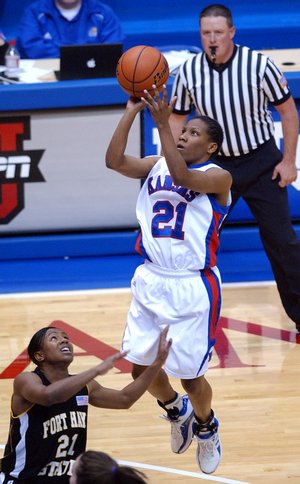 Morris, Shaquina Mosley, Ivana Catic, Taylor McIntosh and Jamie Boyd started, and Henrickson said that lineup likely would remain the same for KU's next exhibition game Sunday against Washburn. Although the game did not count in the standings and featured a large scoring margin, each of KU's 14 players played during the first half.

Mosley, Catic and freshmen LaChelda Jacobs and Kelly Kohn each took turns running the offense. In the frontcourt, McIntosh, Morris and Danielle McCray paced the offense.

Morris, who was told she would start right before the game, claimed to not experience any nervousness. And she calmly dished out an assist to Mosley on the game's first possession. Her 14-point performance featured a block and four steals, including one where she called timeout before falling out of bounds.

"Any time a freshman comes out that aggressive and that confident," Henrickson said, "that's usually not the norm."

Bonnie-ball returned for its' third season tonight in Allen Fieldhouse.

Kansas shot 65.5 percent on the game compared to 20 percent for Fort Hays State as a result of its fast-paced offense. KU racked up 16 fast-break points, and that exact number serves as a goal for each game.

"That's what we've been working on all summer," McCray said. "We like to be up-tempo and just get it and go in transition."

Now the young Jayhawks need to work on putting together a full game.

"Overall I was pleased," Henrickson said, "just disappointed with the second half."

The girls look like that have great potential. Good to see them run more and not trying to run down the clock. Keep it up and you will get better. Good job last night.