For Ivana Catic, it was a December to remember.

Catic was a rookie point guard, yet the clear-cut catalyst for a Kansas University women's basketball team that began last season with a surprising 12-0 record.

A native of Serbia who had spent the previous year at a prep school in West Virginia, Catic was turning the tiller of the Jayhawks' offense like a old salt while averaging more than 11 points a game.

Catic, a 5-foot-8 left-hander with an outgoing personality and a palpable flair, looked like a real find for KU coach Bonnie Henrickson. Then reality struck during the Big 12 Conference portion of the schedule.

"She kind of hit the wall in January," Henrickson said, "and never got through it, although she bounced off from time to time."

Five times Catic bounced back to a reserve role, benched by Henrickson primarily because she was having trouble defending more athletic Big 12 point guards.

"It was a wake-up call," Catic said of her demotions. "I've worked hard to get back and improve my defense."

Specifically, Catic has been working on sidewinders, an exercise designed to improve lateral movement, in an effort to enhance her footwork.

"I have to be more explosive and quicker," Catic said. 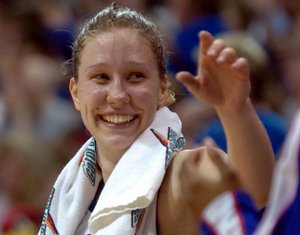 Ivana Catic was a catalyst for KU''s 12-0 start last season, but she struggled once the Big 12 season began.

Catic's defensive woes affected her offense as well. For instance, she shot 47.7 percent in non-league games, but only 37.4 percent against conference foes.

At the same time, her three-point accuracy nose-dived. She made an impressive 14 of 29 threes against non-Big 12 opponents, but a paltry 5 of 29 treys against league teams.

Nevertheless, Catic is the leading returning scorer on the graduation-depleted Jayhawks after averaging 7.7 points a game during her freshman year.

Even though still classified as an underclassman, the presence of seven first-year players - more than half the roster - makes the Serbian southpaw feel older than her 20 years.

"It's kind of weird with all these freshmen," she said with a smile. "I feel like I've been here forever."

Catic is a bit quirky herself in that she wears her game socks up to below her knees - a trait, it turns out, that isn't so much personal as it is mandatory. Catic has a tattoo on one leg - applied when she was a junior in high school - and Henrickson mandates that all body decorations be covered.

"It's a Chinese symbol," Catic said, "that means persistence, fate and patience. Those are traits I believe in, and they're too long to be written in Serbian or English, so I went for the symbol."

At first, Catic tried to cover her tattoo with a bandage, as teammate Shaquina Mosley does with the one on her right shoulder, but Catic thought a leg bandage was too prominent and opted for the high socks instead.

However she looks, Catic is primed for the upcoming season, hoping a year of experience will improve her overall game just as six weeks in Serbia over the summer soothed her homesickness.

Putting it another way, Catic is anxious to prove she's no Yugo, the automobile built in her native country that ranks as the international symbol of shoddy manufacture.

Although conceding the Yugo is hardly a Rolls-Royce, Catic believes the bad reputation of the Serbian vehicle is unwarranted.

"My mother drives a Yugo," Catic said. "They're still making them over there and they're not that bad. They've really improved."

That's good news for potential Yugo purchasers and perhaps portent that Catic can make strides, too.