Kansas University volleyball coach Ray Bechard had dreamed of coaching Division I volleyball. So when Kansas State offered the Barton Community College coach its head job during the mid-1990s, moving on seemed like a no-brainer except to his son, Brennan.

"Dad, you can take that job," Brennan said. "But I'm still going to cheer for Jacque Vaughn and the Jayhawks."

While Ray turned down the K-State job, Brennan, a Lawrence native and Lawrence High graduate, has rooted for Kansas basketball his entire life.

Brennan attended the 2002 and 2003 Final Fours. During second grade, he bragged to his classmates about missing school for the Big Eight tournament and has attended nearly every tournament since. Now he dons the No. 11 jersey number of his idol Vaughn.

"It's definitely very exciting," Bechard said. "Ever since I remember, I just grew up loving KU basketball."

After a freshman season at Barton County in which he averaged 2.6 points and compiled 25 assists while logging 8.9 minutes per game, KU invited Bechard to walk on. Although he salivated at the chance to play for Kansas, he valued his time at Barton and said the skill level helped his game. His Barton team included former Fresno State player Dominique White.

"He played against some great players," Ray Bechard said. "It did a lot to get him ready for this opportunity here."

A 40.4 percent three-point shooter at Barton, Bechard, 6-foot, 183 pounds, can use his long-range shooting to help spread the defense. More than likely, though, it's the sophomore's hustle going after loose balls and playing tight defense that will help push the Jayhawks. 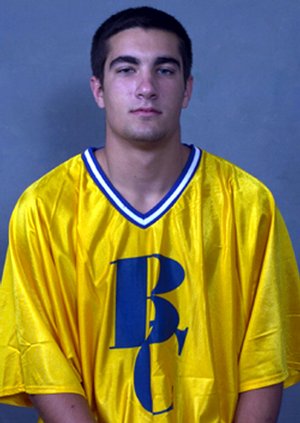 "My role is to do all the little things in practice," Bechard said, "to get the best out of all the other guys.'

Walk-ons, like Bechard, also play a significant emotional role, supporting the team as a cheerleader.

"He can never get mad," junior Russell Robinson said. "He has to be the guy that keeps everybody smiling. He's done a great job of that so far."

At LHS, Bechard enjoyed a starring role. The Lions' second-leading scorer during his senior season, he averaged 11.5 points and made the All-Sunflower League team. He credits his mastery of the game's fundamentals to Lions coach Chris Davis.

"I learned a lot from coach Davis," Bechard said. "It definitely prepared me."

As the son of another coach, Brennan frequented volleyball games, practices and camps. So why didn't he follow in the volleyball-playing footsteps of his father and sister Ashley, a four-time letterwinner at KU?

"We toyed with it a little bit," Ray said. "He knew there weren't a lot of opportunities."

While Kansas lacked many league volleyball teams for boys, Brennan developed a passion for hoops and began playing at the age of 5. Because of his father's position at Barton, he always had access to a gym.

"I sensed that basketball was something he really enjoyed," Ray said.

After rejecting K-State's offer, Ray Bechard accepted the KU job prior to the 1998 season.

"When the call came that I got the job," he said, "my daughter was crying, and my son was jumping up and down."