As rare a speciman is Wright is - lean, explosive and full of tools - there might be another one on Kansas University's men's basketball team this season. That is, if you listen to the players.

It's freshman Darrell Arthur, and if you know nothing else about it, you can at least see a similarity in their slender frames.

But Arthur has practiced and played pickup with Wright for months now, and he sees a lot more in common than just body types.

"My game is transitional," Arthur said. "I like to get up and down the court. I think me and Juju (Wright) play similar, so I just look at his game and try to do the same thing when I get on the court." 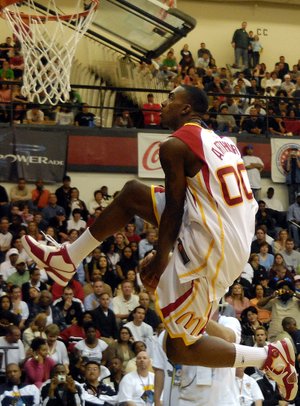 Darrell Arthur had a couple of impressive slams during the McDonald's All-American game's dunk contest.

You could consider it wishful thinking comparing himself to Wright, the preseason Big 12 Conference co-player of the year and likley a future NBA draft pick. But Arthur's not the only one lining the two up.

"He's like another Julian Wright, but bigger, faster, stronger," forward Darnell Jackson said. "And he can jump out the gym. I've never seen anybody 6-10 jump so high. He's crazy."

Arthur also claims he can shoot the rock from outside, which could let coach Bill Self get creative with his lineups. Wright likely will see some time on the perimeter this year, and Arthur said he would be capable of doing so as well after some hard work.

"I have to work on my ballhandling a little bit more," Arthur said. "But shooting-wise, I think I'm all right. We do a lot of picking and popping, so that works fine for me. That's my game. 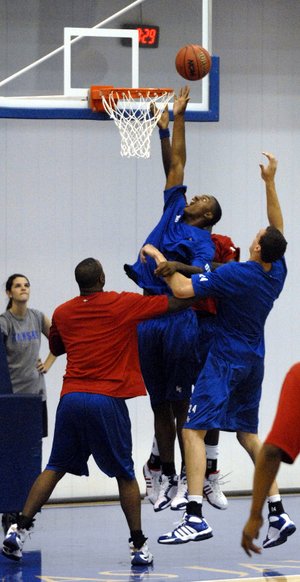 Freshman Darrell Arthur, top, made a quick impression on his KU teammates during preseason pick-up games.

"Coach wants me to shoot more because he thinks I'm more passive. But I'm just trying to get into the flow of everything."

For now, Arthur looks to bring an athletic presence inside which was vacated by the suspension of junior C.J. Giles. He's called "Slim Shady" because while 6-foot-10, Arthur weighs just 227 pounds and played lighter than that at South Oak Cliff High in Dallas.

He'll also do something no Jayhawk has done since Greg Ostertag - wear jersey No. 00. Arthur admired the number when he was in junior high, watching an older player with the same number dominate the hardwood at South Oak Cliff. So he took it over when he joined varsity, and now will wear it during his time at Kansas.

Arthur knows there's no playing-time guarantee for him.

No freshman under Self has had that. But he's in the mix, along with Wright, Jackson and Sasha Kaun.

And that's good enough for him.

"I like working for my spot," Arthur said, "instead of it being given to me."