In anticipation of Allen

No sense trying to hide what will be obvious at pregame meal, in the locker room and on the Allen Fieldhouse court during warmups tonight.

"The first couple of minutes I get out there, I'll be getting the hang of things, how things are going - get some good defensive stops and I'll be all right," Collins said.

"I'm kind of nervous, but I have to step up, because that's what we're all about. I have to try to produce," Arthur said.

"A little of both, really," Arthur responded when asked if he was nervous about the big picture of his freshman season or merely Game One. "It's going to be tough." 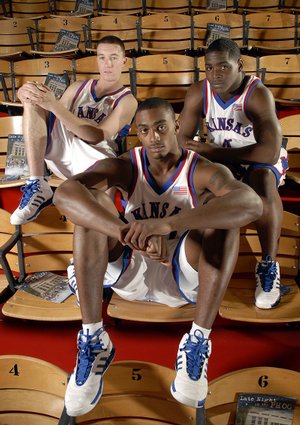 "First game in the fieldhouse ... it's going to be a fun time. I mean that's all I can really say," Morningstar said.

The three freshmen figure to have some time to soak in the atmosphere before taking the floor.

"These guys will all be nervous as they can be on Thursday. I'd be disappointed if they weren't," Self said of his entire roster, not just the newcomers. "They need to learn to play under those type situations. It's big for our freshmen, but also big for Jeremy (Case), big for Rod (Stewart), big for Julian, who needs to go out and play and have success."

The 16,300 fans who pack the building will have their eyes on the newcomers, the unknown pieces to what fans hope is a national title contender.

"I think they're going to take it like we did last year, just like me, Mario and Julian. They are going to come out here and just play their type of game," sophomore Rush said of the newcomers. "Just get comfortable with the feel of how we're playing and just don't let the crowd get into your head and just stay focused on the court."

Self said the team was far from a finished product, the Jayhawks having worked mostly on "meat and potatoes" at practice the past couple weeks.

"This is not like (pro) football where you play four exhibition games, and in the first and second one guys play just two series," Self said. "This is a good opportunity for us to do some good things as a team regardless of what the score says or regardless of who you are playing against. You are playing in front of people against a team that is well coached."

"All our players know Bob well from summer and (working his) camp," Self said. "He is a terrific coach. He's been doing it a long time and won a lot of games. Last year they struggled a bit but return a majority of the team. It should be a fun game.

"Two years ago it was a nine-point game, a four or five point game late. They really had a shot. I think that game probably helped us in a lot of ways. They played us well and will do that Thursday."

As far as KU's freshmen ... they can dream they'll have memorable debuts.

"Me and Sherron ... every day we talk about trying to earn our spots on the court. Hopefully, we can make it happen," Arthur said. " It's going to be tough because we've got all our starters back except Sasha (Kaun, injured) and C.J. (Giles, suspended)."

"We just want to come out and play as well as we can," Collins said. "We want to do everything coach tells us to do and we should come out on top."

LAHAWK - I'm in Northern Virginia and have purchased the Full Court as well. You can find the schedule here:

LAWRENCE, Kan. -- Kansas fans will be able to watch tonight's men's basketball game - and the next two games - live via AT&T Jayhawk All Access on kuathletics.com.

The three games - tonight vs. Washburn University, November 7 vs. Emporia State and November 11 vs. Northern Arizona - will be televised by the Jayhawk Network in the state of Kansas, but will not appear on ESPN's Full Court package. All other games on this season's men's basketball schedule will appear either on Full Court or on national television. Kansas Athletics is also streaming most KU women's basketball games as well.

Hey, I've never done the Jayhawk All Access before...is that free or do you have to pay to watch the game? I'm also out of state (SC) so I'd really like to check out the team this year because I really miss watching them.

Is it just me, or do these youngsters already have the mind set that is needed to excel. They sound hungry and the anticipation in their words are a tribute to Bill and his staff. Putting a veteran team on the floor to open the season will benefit these young men as the game progresses. I can't wait to hear the ovation when Bill makes his first subs. Go get'em Hawks.

It's here! We've got an exciting team what with the returners and the new freshmen. I can't wait to see Julian get after it. Best of luck this season. Go Hawks!

Thanks slcosner & ebbenji. Damn, guess I'll have to check the website tomorrow to see what happened. All of this technology and can't get the games you want. slcosner, where at in La? I'm in Lakeview Terrace (San Fernando Valley).

not to be a negative nancy, but my motto this season is "I'll believe it when I see it." This team is AMAZING on paper but lets remember that they havent even played their first game yet. And remember what happened against Washburn last year? I realize its the first game but after those first 2 shots are taken the butterflies should be gone and the game should be a blowout. I want to see a KU basketball team that has a "step on your throat" attitude. Sure close games are great to win and are exciting to remember but as KU fans the only thing that matters is what happens at the dance (maybe thats goor or bad but that is how the majority of KU fans think). Ill see you guys there!!! EVERYONE WEAR BLUE!!!!

lozar34, thanks. I know in the past that Jayhawk TV is the station that shows the regular season games. Chris Piper was the color guy last season. Anyway, I'll get home at 5:00p and see if our boys are on. I also agree with Teapot9, I want to see this team destroy teams early and not allow them to stay in the game late. You all know how are freethrow shooting is every year, damn. At least we will not have to watch Sasha shoot them for awhile. While he's out, he should park his butt on the freethrow line and shoot. Enough talk, let's get it going!!!!

For some reason, the Detroit game isn't available on either Full Court or National TV. It's the only one. I have no idea why.

I need some help out there HAWK lovers. I have purchased the Direct TV college basketball package for this year and I'm wondering, will the exhibition games be shown or only the regular season games? Being in LA (don't hold that against me, I'm a Kansas guy all the way, '77 baby) I have no idea. HELP!!!

i also live in LA, fullcourt does not start until next week. i've had fullcourt since the first year it started. exhibition games are not shown. i wish they were. ROCK CHALK JAYHAWK! that goes for our football team as well- beat the cyclones!

LAHAWK.....DirectTV should have a Kansas City channel on there which will prolly show the game. ROCK CHALK BABY!!!! LET THE GAMES BEGIN!!!

I'm getting butterflies in my stomach and goosebumps just thinkin about tonight. It's gonna be awesome, baby!