"The doctors said I didn't need crutches from the beginning because it didn't tear completely. You suck it up and go," Kaun said before hobbling through the northwest tunnel of Allen Fieldhouse to watch his teammates practice.

The 6-foot-11, 250-pound Kaun actually was back to his regular routine as early as Monday morning, attending classes a day after suffering a partially torn patellar tendon while trying to block a Jeremy Case inside shot in a scrimmage situation Sunday.

"I jumped in a funny way. I felt something as I jumped. It didn't feel good," Kaun said. "At first it started hurting and I didn't think it was that bad. But then I tried to do another drill and it started to get more irritating."

He left practice and was examined by doctors who determined the injury would heal in three to six weeks without surgery.

"I didn't think it was going to be as bad as I guess it was," Kaun said. "When I found out I'd have to be out for so long it was frustrating, but I was glad I didn't need surgery. That would have me out a lot longer."

Kaun isn't about to predict when he will return. It could be Dec. 2 at DePaul, maybe Dec. 19 against Winston-Salem State. 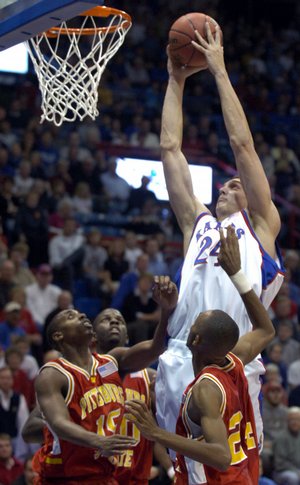 Kansas University's Sasha Kaun dunks over a trio of Pittsburg State players. KU's junior center won't be dunking on anyone for at least the next three weeks as he recovers from a partial tear of the patellar tendon in his right knee.

"I'm hoping I'll be out about three weeks. I will try to get as much movement as I can in rehab, try to get back as quick as I can. I'll do the rehab, do whatever the doctors say," Kaun said. "I'll be back as soon as the doctors say I can play."

He's confident Darrell Arthur, Darnell Jackson and Julian Wright will fare well inside in his absence. Walk-on Matt Kleinmann could see some time, as well as Rodrick Stewart possibly moving from guard to power forward.

"I think they will do great. Darrell is doing awesome," Kaun said. "Darnell has been real good. Julian is one of the best players. I think we'll do just fine."

The Jayhawks, who open the exhibition season against Washburn at 7 p.m. Thursday at Allen Fieldhouse, realize they'll have to rally without Kaun and C.J. Giles, who remains on suspension.

"I think it's going to be kind of tough for the big men. They won't have many breaks," sophomore Brandon Rush said. "I think it hurts a lot we lost Sasha. Losing C.J. too really doesn't help at all. We've only got three big men. It's going to be tough.

"I think we're going to go out there a little sloppy like any other young team and start picking it up after the first couple games."

A physical player, Kaun, who sported the remnants of a black eye Tuesday - he took a shot while rebounding at practice last week - also will be missed at daily workouts.

"Practice is going to be awkward," Jackson said. "I'm always used to Sasha hitting me, knocking me off or something. It's just knowing when you go down there you will get hit by Sasha, by a finger, elbow or knee, stepped on or something."

¢ Arthur OK: Frosh Arthur, who needed five stitches to close a cut on his right hand after banging it on the rim Sunday while trying to block a shot, said he'll be fine for Thursday's exhibition.

"I just need to step it up and play hard. I'm probably not going to start," he indicated. "My role is to rebound, play good defense, block a lot of shots and score some points. I need to step up, grow up since C.J. and Sasha aren't here and play a lot of minutes."

¢ Collins OK, too: Frosh guard Sherron Collins on his strained calf: "I went through a bang/bang play and collided with another player and got a deep bruise. I'm all right," Collins said.

Well, this Kansas team is banged up, at least in the short run. It's good to hear that initial reports have Sasha out for only a few weeks.

The prospect of losing him for six weeks is too long, but I actually think that not having Sasha for three weeks could be a very good thing in terms of trying some new things and developing post altarnatives.

First, I think that this season especially, Kansas will have to adjust a few times and play a smaller lineup if they want to win a national championship. I mean, our backcourt and wing players are unbelievable athletes who all want to push the tempo and score in transition--Chalmers, Robinson, Collins, Wright, Rush--We simply cannot keep any of them off the floor for too long. If we want to win it all we have to play to our strength.

Sasha's injury will allow Coach Self to tinker with some smaller lineup options early in the season, such as a lineup of Collins, Chalmers, Robinson, Rush, Arthur, or Robinson, Chalmers, Rush, Wright, Arthur. Also, I think Darnell Jackson will have a chance to develop rapidly on the offensive end in Sasha's absence. Sasha's injury coupled with C.J.'s suspension gives Self a chance to throw some unconventional looks out there...

I mean, he's considering moving Rodrick Stewart to the post! I'm intrigued...Stewart never got a chance last year but he's strong as an ox and has great leaping ability. I could see him becoming a kind of poor man's P.J. Tucker if he buys into his role. If there's ever a time to try some unconventional lineups, this may be it.

Kaun is tough as nails. He'll be back by the Florida game.

If not, our guards will make people forget about Villanova last year.

I saw Sasha walking around campus today fine. I don't think it will be 6 weeks. I just don't want him to come back too soon and have him really mess it up

What was Villanova last year?

Villanova was 2 years ago.

the 4 gaurd play from Nova was last year..wasn't it???

One thing is for sure, I hope Self takes the position that we decide the way the game goes instead of reacting to other teams (what their lineup is and what they are running offensively or defensively). I think we have the talent to force teams to adjust to us instead of vice versa. Sure there will be times when we have foul trouble or injuries and we will have to show our versatility; but I would rather our guys walk on the court with their chests out knowing they are in charge of the tempo of the game. Can't wait to see them against solid competition.

yes the 4 guard play of nova was last year..I just hope we dont run up against a team that slows the pace and feeds there big man all game..someone like hansborough from UNC could kill us. However, as always, I tend to believe we'll go undefeated with our depth..

the first time Case ever shoots anything but a three-pointer and look what happens.

CJ blew it and it is now REALLY hurting the whole team.

Here's my question...if Kaun is out a minimum of three weeks, let's just say from today, that still puts him back in time for the Florida game. Even if he's out four weeks (from the time of the injury) he's still back in time for the Florida. I'm not sure where all the news outlets are coming up with the math that he won't be back for the Florida game AT ALL. I really hope he comes back. Kaun is a great player and an integral part of our team that will be sorely missed against one of the best frontcourts in the nation (Joakim Noah and Al Horford).