Norman, Okla. — A traditional powerhouse was suffering through three consecutive losing seasons when it turned to a man with no head coaching experience. And what a move it proved to be for Oklahoma.

Bob Stoops won his first game and dozens more to follow. On Saturday, he'll coach his 100th Sooners game when No. 18 Oklahoma plays at No. 21 Texas A&M. He'll be seeking his 82nd win in his eighth season with the Sooners.

"Put it up against anyone that's coached, it'd be highly impressive. I don't think you could make a case for anything but," athletic director Joe Castiglione said. "It's a remarkable start to a wonderful career as head coach."

But here are the type of shoes Stoops has had to fill. Of the four men who coached at least 100 games at Oklahoma, Stoops' impressive start ranks only third. Bud Wilkinson went 89-8-3 and had three championships in his first 100 games with the Sooners, and Barry Switzer was 86-11-3 with two national titles.

"He wouldn't have come to the University of Oklahoma if we didn't create an environment where pursuing championships was possible, and I'm not sure I would have either," Castiglione said. "I think that makes Oklahoma special. We have to continue to shoot for the top. That's just how we're put together."

When Stoops arrived in Norman in 1999, it was in different circumstances than Wilkinson and Switzer, whose sepia photos hang side-by-side with one of Stoops in the Sooners' stadium club. Stoops took over Oklahoma after its worst three-year stretch in history while the others both inherited winners.

Stoops took Oklahoma back to a bowl game in his first season and then won a national title his second season - just as Switzer did. He has followed that with five more bowl games, including two more national title games, and the Sooners (6-2, 3-1 Big 12) are eligible for the postseason again this year. 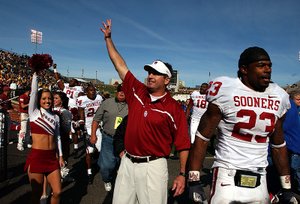 Because of that great start, winning is once again expected at Oklahoma.

"The standard is so high that sometimes you've got to be almost perfect to reach the standard that everyone wants," offensive coordinator Kevin Wilson said. "But you're pushing to get there. The bottom line is you're pushing each week to be better and to get the next win."

Stoops had more victories in his first five seasons than all but three other coaches in history and currently ranks fourth in winning percentage among active coaches, hundredths of a point behind Florida's Urban Meyer and Miami's Larry Coker.

"Obviously he's been an incredible leader for our program and has handled the responsibility that goes with being the head coach at a place like Oklahoma with tremendous class and dignity," Castiglione said. "He's obviously a very passionate person, very skilled and his character is impeccable. He'd be the prototype of the coach every university would want to have."

But Stoops' run at Oklahoma hasn't been all roses. After losing 10 players to the NFL last year, Stoops' five-game winning streak against rival Texas ended and the Sooners struggled to a 2-3 start - their worst in his tenure. A five-year run of January bowl games also ended.

Still, Castiglione said he hoped Stoops stays at Oklahoma "for many more years to come," and doesn't see him going anywhere soon.

"With Bob Stoops, you don't get anything less than 100 percent," Castiglione said.