Five-year deal thought to be worth nearly $50 million 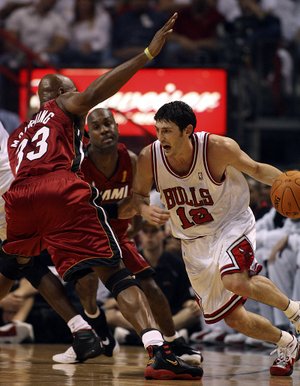 Miami — Hours before the regular season began, the Chicago Bulls already had something to celebrate.

Guard Kirk Hinrich and the Bulls agreed Tuesday on a five-year extension, the maximum length allowed under league rules. The deal, which kicks in at the start of next season, is believed to be worth about $47.5 million.

If Hinrich had not accepted the deal by 11:59 p.m. Tuesday, he would have become a restricted free agent next summer and the Bulls would have had the opportunity to match any offer. Now, that angst-ridden process can safely be canceled.

"It's a dream come true, completely," Hinrich said. "To be with this organization, an organization that I grew up cheering for and was a big fan of and to be able to provide my family with security, it's just a great day. ... My parents used to scrap pennies to provide for me, and now I'm making almost $50 million playing basketball."

Bulls general manager John Paxson, in a statement released by the team, said Hinrich's "character and commitment" also made him worth keeping long-term.

"This is a very good day for the Chicago Bulls organization," Paxson said.

Hinrich's scoring numbers increased in each of his first three seasons with the Bulls, from 12.0 points per game as a rookie to 15.9 last season, when Chicago won 12 of its last 14 regular-season games.

As recently as Sunday, Hinrich said he didn't think the deal would get done in time.

Good for you, Kirk. Represent for the 'Hawks! I saw him last night against the Heat and he looked great. He deserves this.

Couldn't happen to a classier guy. He's the type of player/person that makes you proud to be a Jayhawk.