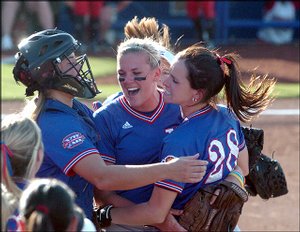 OKLAHOMA CITY — Nebraska made four errors, while Kansas University made none.

As a result, the Jayhawks advanced to the championship game of the Big 12 Conference softball tournament with a 2-0 victory Friday over the Huskers at the Hall of Fame Stadium.

The sixth-seeded Jayhawks, in the title game for the first time in Big 12 history, will face fifth-seeded Oklahoma at 3 p.m. today for the championship.

Kansas (33-24) scored a single run in the fifth and another in the seventh, and pitcher Kassie Humphreys threw a complete-game three-hitter against the second-seeded Huskers.

KU has won six straight and has beaten two top-25 teams in the tournament. NU (42-10) is ranked 14th; Baylor, ranked 19th, fell to the Jayhawks on Thursday.

Kansas managed just two hits against NU, but made the most of them.

She led off the fifth with a bunt single, moved to second on a sacrifice by Jessica Moppin and went to third on Heather Stanley's groundout. With a hit-and-run on, Nettie Fierros reached on a fielding error by third baseman Carmen Kier, and Frankenstein scored.

Frankenstein reached on a fielder's choice, stole second and moved to third on a throwing error by catcher Jamie Waldecker. With two outs, NU second baseman Jessica Yoachim mishandled a grounder by Stanley, and Frankenstein scored. 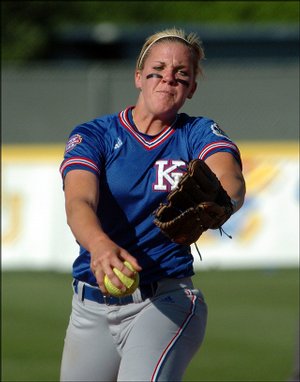 Kansas' Kassie Humphreys throws a pitch Friday, May 12, 2006, in a Big 12 softball tournament game against Nebraska in Oklahoma City.

Humphreys (16-16) recorded her eighth complete-game shutout of the season. She struck out seven, gave up just three hits and walked one in seven innings to get her fourth straight win in the circle.

NU ace Ashley DeBuhr (24-8) was solid for the Huskers, fanning 10 Jayhawks, allowing just two hits and walking one in the seven-inning effort.

Samantha Ricketts went 3-for-3 at the plate with an RBI, a single up the middle that put the Sooner up 1-0 in the first inning. Savannah Long and Tracie Dickenson each had an RBI.