Dallas — Thanks to Mario Boggan, who was nearly perfect on Thursday night, Oklahoma State lives to play another day.

Boggan, a 6-foot-7, 235-pound junior forward, exploded for 23 points in the Cowboys' 79-70 first-round Big 12 victory over Iowa State at American Airlines Center. He hit seven of eight field-goal attempts and all nine of his free-throw tries.

"I think it's because I started out aggressive," Boggan said of his accurate evening. "Coach (Sean Sutton) told me I had to go in there and just finish, finish strong, so I started off with a put-back that gave me a comfort level, and then I started going strong to the basket."

Boggan grabbed nine rebounds in 32 minutes for the Cowboys, who also received a stellar outing from 6-6 junior Torre Johnson, who scored 20 points off 9-of-11 shooting. Johnson hit two of three free throws and had five boards. Sophomore JamesOn Curry contributed 14 points, including the biggest bucket of the night, a 14-foot jumper that boosted a two-point lead to 72-68 with 1:41 left.

Of Johnson, head coach designate Sutton said: "We told him if we were going to have a chance to make a run and win this tournament, he was going to have to be a big part of it. He responded tonight."

Curry, who is OSU's most publicized player, certainly cashed a big shot. 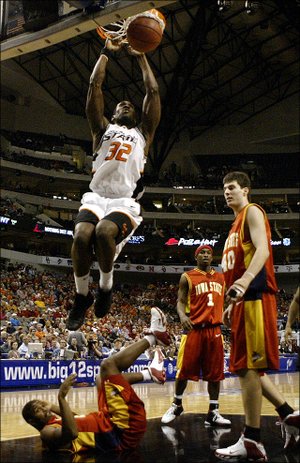 "Who knows what would have happened had he missed and they come down and scored?" Sutton said, realizing his team looked great in building a 40-27 halftime lead, but lost its composure late as the Cyclones, who were led by Curtis Stinson's 22 tallies, rallied.

"Coach told me to go make a big play, relax and make it," Curry said.

Now, the Pokes get another chance at KU, a team that beat OSU, 64-49, Feb. 13 in Stillwater. That was the first game OSU played under the direction of Sutton, who has led the Pokes to a 4-3 record since his dad, Eddie, took the sidelines after a car accident and DUI charge.

"I think coach Self (Bill, KU) has done as good a coaching job as anyone as there's been in the country," Sutton said. "His team has made unbelievable improvements since December. I thought the first time we played we were really good defensively, but lousy at the offensive end, turning it over 20 times.

"Oklahoma State-Kansas has always been a great game, and I think our guys are excited to be a part of it tomorrow. Last year the game at Lawrence where they won by two (81-79) might have been the best regular-season game I've been part of. The game in Kansas City (a 78-75 OSU win) I would put in my top five of all time. Both teams play at such a high level."