Galen Fiss, an All-Big Seven fullback and one of Kansas University's most well-known football and baseball players, died Monday night. He was 75.

Fiss played fullback and linebacker on KU's football team and spent two seasons on the Jayhawk baseball team, between 1950-53. He played 11 seasons at linebacker for the Cleveland Browns, participating in the '63 and '64 Pro Bowls.

"It was the thrill of my career to be associated with Galen," former KU coach Don Fambrough said. "I guess if you had to write out the prerequisites of what you're looking for in a football player, it'd pretty much fit him."

Fiss was captain on Cleveland's NFL championship team in 1964 and played in the 1957 championship game alongside McCormack. 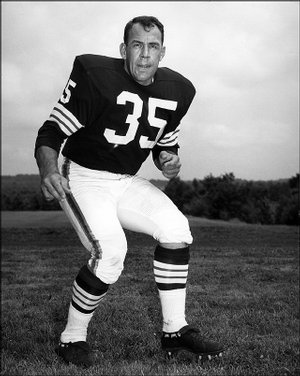 "Two KU boys," Fambrough added. "That was quite a thrill."

Fambrough recruited Fiss out of Johnson, a small town in western Kansas close to the Colorado border, where he graduated in a class of four.

"Galen was one of the first football players that I ever recruited," Fambrough said. "I dont know how many coaches made it to Johnson. I was probably the only coach that could find it."

After starring at both linebacker and fullback at KU, Fiss actually played professional baseball first, after he was drafted by the NFL's Browns in 1953 but not offered a contract right away. He ended up signing with baseball's Cleveland Indians and playing the 1953 season in the minors alongside Roger Maris before going to the Air Force for two years. He finally joined the Browns as a 25-year old in 1956.

Fiss retired from the NFL to Leawood in 1966 and worked in the insurance business as president and founder of G.R. Fiss Co. in Kansas City. Both of his sons, Bob and Scott Fiss, were offensive linemen for the Jayhawks in the late 1970s and early 1980s.

Galen Fiss stayed involved with KU athletics, serving as K-Club president, on the KU athletic board and on the 16-person search committee organized to find a new football coach after Terry Allen's firing in 2001. Mark Mangino eventually was picked and remains KU's coach today.

"Galen will long be remembered as one of the toughest football players ever to wear a Jayhawk uniform," Mangino said in a statement. "He genuinely loved KU and was a staunch supporter of the program throughout the years. He will be sadly missed by all of us associated with the University of Kansas."

A memorial service will be held at 1 p.m. Friday at the Grace & Holy Trinity Cathedral at 13th Street and Broadway in Kansas City, Mo.

Can you imagine being a skinny 6'4" 185 lb. freshman offensive end scrimaging against linebacker Galen Fiss in spring practice in 1951? It was his job to keep me from getting down field, and he was good at it! I seldom, if ever, had to worry about dropping a pass because I seldom, if ever, got down field far enough that a pass was thrown to me. What a bull! And what a nice person Galen was. He was truly great. It was a true privilege to know him!