The next great thing?

One year ago, Kansas University football defensive coordinator Bill Young glowed about athletic end Charlton Keith, a promising player who at the time had zero career starts at KU.

Young said Keith could be "one of the best we've had since we've been here," and a season of sacks and run-stopping by No. 99 proved Young a prophet: Keith left as one of the best defensive players KU has had in a decade.

Well, Bill Young has done it again. Another lineman. Another bold statement.

"Rodney Allen," Young said recently, "is going to be as talented of a defensive lineman as we've had since we've been here."

Such is the optimistic thinking of Young, who, despite eight starters lost and depth issues almost everywhere, still thinks a big dropoff isn't in the cards for KU's defense.

Thing is, Rodney Allen isn't even a returning starter. Like Keith, Allen's talents were hidden on the second row of the depth chart, and the bulk of his playing time came in third-down bandit packages.

Nope, the only returning starters are safety Jerome Kemp, cornerback Aqib Talib and defensive tackle James McClinton. But Young still sees Allen as a capable leader because he did get plenty of snaps last season. 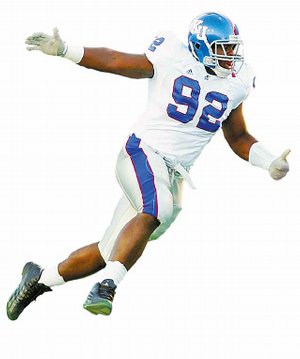 A leader, perhaps, of one of the Big 12 Conference's strongest defenses once again.

"Obviously, we're extremely proud of our defense last year," Young said, "but we could be better. We have a chance to be as good or better this year. That remains to be seen."

Whether it's just bubbling optimism or a real belief in his players, Young's words are worth hearing.

After 27 years of coaching at the collegiate level, Young has seen it all. Heck, in the last five years, he helped orchestrate the turnaround of KU's defense, sending it from dismal depths in 2002 to one of the nation's best by 2005.

Besides talent, a big difference in that four-year span was experience - something Nick Reid, Banks Floodman, Kevin Kane and Charles Gordon didn't have in '02, but had plenty of by '05.

With all of them gone, experience certainly is more scarce this season in players like Mike Rivera, Joe Mortensen and Darrell Stuckey.

But where will that bleed through the most?

"You learn by mistakes," Young said. "I think that's a huge part of it. You're out there in practice and make an error and then correct it. Maybe you make it one more time, and then you've got it down and don't make it again. When you're playing for four years or so, they've had all those opportunities to make mistakes and learn from them, and that's the experience factor. You just can't buy it."

"Eric Washington came into the game when we were way ahead against Florida Atlantic. And they did a throw-back," Young said. "He never saw the throw-back, because he's never seen it. The next time they try the throw-back, he's going to be all over it because of having that experience.

"But," Young added with a grin, "it ended up being a seven-point experience."

If anything can combat a lack of experience, it's an experienced coach like Young.

And, judging by how his prediction with Keith panned out last year, it might be wise to check out Rodney Allen at defensive end this season.

"We have a great attitude and some very talented players," Young said, before adding for good measure, "guys like Rodney Allen."

I've been waiting for KU to have a football player that doesn't just get drafted, but gets serious playing time and recognition in the NFL. Rodney Allen looks like that kind of player, he's 280 pounds yet fast enough to play D-end.

Umm...LJ World the graphic for this story on the main page says new look "offense" not defense.

What about Aqib Talib? He looks like an NFL corner to me. Hopefully he'll see the value of spending some time in college to improve his NFL stock.

Talib definitely has that potential as well. Of course, so do many of our current players these days. I think Mortensen and Rivera, James McClinton, Brandon McAnderson, Angus Quigley, the Marcuses (Hereford and Henry), Derek Fine, Caleb Blakesley, Wayne Wilder, Brandon Duncan, and James Holt all have pro potential. They are all the right size and speed for an NFL player of their respective postitions so that is half the battle. Show some grit and tenacity and each of them could have it made.

I could probably think of some others but the list could get ridiculously long. Having this many talented athletes on our team at one time is almost unprecedented in KU history.

Wow! A football article! For a while I was wondering if LJW forgot what football was. No wonder Glen Mason jetted out of Lawrence the way he did.