Hadl sounds off on QB greats

Ever the center of attention without ever trying to be that, cool as can be without necessarily being aware of that, John Hadl enjoys having lunch and dinner at the Eldridge Hotel, where the restaurant, Ten, is named after the number worn by another former Kansas University quarterback of note, Bobby Douglass.

On a recent hot, steamy afternoon, Hadl, No. 21, took comfort in the air conditioning and got into the topic of conversation: quarterbacks. Before offering his opinion on Kerry Meier, the redshirt freshman who figures to be under center for every game he's healthy over the next four years, Hadl shared stories on quarterbacks whose stars crossed with his over the years.

"In my opinion, the greatest quarterback of all-time is John Elway, and I really, really believe that," Hadl said. "He took two teams to the Super Bowl that had no business being there."

Hadl knew Elway long before that. He knew him when he was benched. Can you imagine that: John Elway benched? Hadl couldn't at the time, and he was very close to the situation. Working under head coach Dan Reeves for the Denver Broncos in 1983, Hadl was Elway's first NFL quarterbacks coach.

Elway had forced a trade from Indianapolis, which took him with the first pick of the draft, because he did not want to play for the Colts. Veteran quarterback Steve DeBerg was on hand to help break in the quarterback out of Stanford. 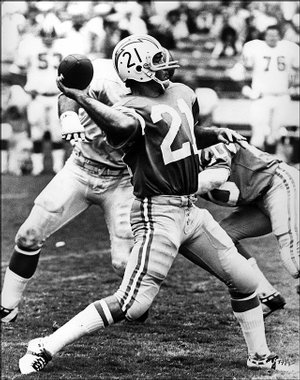 John Hadl winds up to pass for the San Diego Chargers in the 1960s. Hadl, Kansas University associate athletic director and former KU quarterback and running back, compared some of the best NFL quarterbacks of all time to KU freshman Kerry Meier.

Reeves, Hadl said, wanted to start the season with DeBerg under center.

"The rest of us wanted Elway, so he started Elway," Hadl said. "We went into Pittsburgh. Elway didn't have a good game, but he did just enough to win the game, which was a great sign. The next Monday at the team meeting, Reeves comes in front of the whole team, stands up, and says, 'We're going to start DeBerg this week. John didn't have a good game. He's not ready yet, and we're not going to start him.' I knew nothing about it until he stood up and said it."

Hadl said he was shocked.

"It was an easy decision," Hadl said. "I don't know what Reeves was thinking. Reeves was a hell of a guy, but he's not a people guy."

Hadl wasn't the only one who had trouble believing his ears and strongly disagreed with the choice and the way it was handled.

"Let's say we're looking at the stage," Hadl said. "This way's the locker room (points left) and this way's the parking lot (points right). I'm sitting back watching Elway because I know how he was feeling. He gets up and goes out to the parking lot and I follow him out. He's all the way out to his car and I said, 'John, what are you doing?' He said, '(Expletive) this (different expletive). I'm going back to my family. (Expletive) these guys.' 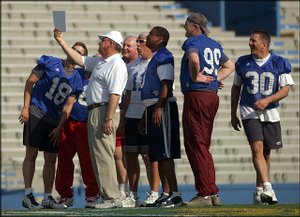 "I said, 'Wait a minute. Wait a minute. We have to talk about this. You have to realize everybody has been criticized in his life at least one time. You have to suck it up. You have to be tough. These things happen all the time. You're going to get hit with things like this all the time.' I kept talking and talking and whatever I said, I finally got him back in there. His old man called me that night and thanked me. He said, 'That kid was leaving.' True story."

The very next season, Hadl coached another Hall of Fame quarterback, this time as head coach, this time in the USFL. Steve Young was the quarterback for the Los Angeles Express.

"We had a great young team, boy," Hadl said. "If that thing had hung on, we could have done some great things. Young was great. Great competitor and a super athlete. He didn't have the arm Elway had, but he was accurate and on time and he could run a 4.5 40. Just a super athlete. He could run like hell and throw it on the run. He did some things running that I'd never seen a quarterback do."

"He had a hell of a game, too," Hadl said. "We had a good time in that league. There were a lot of good coaches."

George Allen, Marv Levy, Jim Mora, Pepper Rodgers and Steve Spurrier were among the big names to coach in the league.

Hadl remains good friends with the man who goes down in history as the face of a league that was a predecessor of sorts to the USFL, except that the AFL made it, ultimately merging with the NFL.

"Just watching Joe Namath was something," Hadl said. "When he was really good, when his knees felt good, he had the best release of anybody, and he had those big hands. When his knees started bothering him, that slowed him down a lot."

On a personal level, Hadl said he and Namath are, "pretty close. Great guy. Great guy. He's really doing a great job raising his girls (after a divorce that took Namath by surprise)."

Jack Kemp, the Republican candidate for the Vice Presidency in the 1996 election and a former NFL quarterback, was Hadl's roommate when the Lawrence native was an NFL rookie.

Hadl never aimed quite that high. Success for the KU football program always has ranked high among his hopes and dreams. He's a huge backer of Mark Mangino, and to hear what he has to say about Meier is to believe Hadl has faith exciting years are on the horizon.

Asked to name a quarterback he's been around who has a similar style to Meier, Hadl went right to the top of his list.

"I'll tell you, he reminds me kind of Elway as far as instincts and the movement and presence on the field," Hadl said, not meaning to suggest Meier would be as good as Elway. "I see him in practice all the time, and I knew he was good. Then in that spring game, I couldn't believe what I was seeing. I really couldn't. He was throwing some big-time passes. Those little flat passes thrown on an angle, those are tough throws, they really are. Savvy, good decision making. He'd take off running when he should. He'd throw it away when he should."

Meier was wearing a red shirt in that game, meaning he didn't have to worry about facing the heat.

"I don't think that will factor in with him," Hadl said. "He'll probably get better because of it. He's fast. He's about the fifth or sixth fastest guy on the team, they say."

Hadl, an All-American as a halfback and then as a quarterback, wasn't fast, but he was elusive and had all the intangibles to go with a strong, accurate arm. He said he liked that former KU quarterback Bill Wittemore, an instinctive player who maximized his physical ability, was on hand as one of Meier's coaches.

"He'll have a settling effect on Meier," Hadl said. "They'll communicate well. He's a natural. He'll be a good coach."

I still have to go with Joe Montana as the greatest QB of all time. But on the subject of Meier, if he really does impress Hadl that is encouraging. Hopefully he can do some Elway type magic for the Hawks while he is here.

Mr. Hadl gets up at 4:30, works out, eats a prune and some some water, raises $250,000 for the university, and meets with the media, before you get out of bed, you slacker hurlehey_boy! By the time 10 AM rolls around, the day is half over and the man deservedly "enjoys" lunch then. By 2 PM he's raised another $100,000, had dinner, shined his head, and is ready for bed. This man is a legend! And who are you again? Hey hurlehey, its 10:45 AM now. Get up and go to class or to your job at mcDonald's. Maybe you'll be lucky enough to hand John his McSalad for lunch at 10 AM one of these days.

I could not think more of Mr. Hadl. And he knows his pro-football too. John Elway is the greatest quarterback of all time.

Thank you Mr. Hadl for all that your do for our univeristy and for representing us Jayhawks the way that you do.

Ditto, except for the Broncos thing.

Hey Wisconsin-Jayhawk, perhaps it is you who should be working at McDonald's, as you obviously have a difficult time reading.

Hadl did not have lunch at 10:00 a.m. He had lunch at a restaurant named "Ten." It's a novel concept, actually understanding what you're talking about before you make a fool of yourself.

I did think his comment was a bit too vicious for such an offhand remark. It is funny that he didn't bother to read the article close enough to realize that it was a slam on a restaurant, not mister Hadl.

By the way, the Broncos comment was totally uncalled for. Rock Chalk and Go Broncos? It should be illegal to cheer for both of those teams at the same time. It's kind of like all of the Missou/Chiefs fans. It makes me queasy to cheer for the same team as a Missou fan. Couldn't they all just cheer for the Rams?

Just kiddin' laidbak_bb, at least your NFL team has been to a SuperBowl more recent than Superbowl IV. If the Chiefs don't put together something soon I think I'm gonna go postal and take out Lamar Hunt with a sniper rifle. His recent move to hire an idiot of a coach that has failed everywhere else he has been doesn't exactly put him on my most favorite person list. I guess Mr. Hunt just wanted to keep Al Saunders and Gunther so he hired a coach that was desperate enough to be a puppet figurehead for the organization (or its whipping boy if Saunders and Gunther don't come through).

JBurtin: i have lived in and around lawrence for more than 15 yrs, but was born in denver and have been a life long broncos fan. and i actually met quite a few other broncos fans while on campus as a student.

and while my bronocs had a few runs within the last handful of seasons and i think look good in the near future too, i do have to say that i am surprised you are not more excited about the chiefs. i was under the impression that everyone was in love with your new coach. i thought it was a good move for them and was actually hoping he would not come back to kc. i guess as long as my team and your team continue to split their two games against each other every season i wont be too upset.