After a car accident claimed the life of his grandmother and seriously injured his mom, KU sophomore Darnell Jackson has found strength in faith, family and teammates

Darnell Jackson is a story of strength.

He's still here after a nine-game suspension this season kept him away from basketball when he needed it the most.

And he's still here after a car accident last year shook him more than anything had in his entire life.

"It's amazing," Jackson said. "I pray every day and tell God thank you for me being here and having the family that I have right here and that I'm with right now."

This is the story of Darnell Jackson: a story of love and loss. But, most of all, a story of strength. 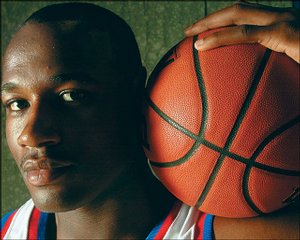 Kansas University sophomore forward Darnell Jackson is digging for strength after the death of his grandmother in a car accident.

"Today, when I got my haircut, the woman asked me, 'How much do you bench?'

"She was like, 'Where do you get your strength from?'"

Darnell's grandmother, Evon, and mother were visiting family in Las Vegas when they were involved in a two-car accident. Shawn escaped with numerous broken bones. Evon, however, did not.

Jackson somehow found the strength to fight through. Basketball took on a greater importance: as a way to escape from the harsh realities of life.

"Right now, I need about everything that comes my way just to keep my mind off of things - just to keep me mellow and relaxed," Jackson said. "When I'm on the court, I'm free."

Just when Jackson seemed to be getting himself back, the game that revived him was snatched away.

The 6-foot-9 forward was suspended nine games to start the season for receiving gifts from an Oklahoma City booster.

"The NCAA suspension hurt our team, but it more importantly affected him negatively at a time where he could afford the least bit of negativity from his personal situation," KU coach Bill Self said. 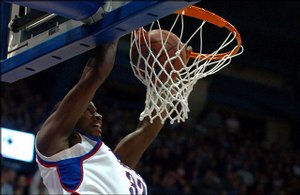 Kansas center Darnell Jackson throws down a dunk in the second half of Thursday's game against Northern Colorado.

The coaches gave Jackson a countdown each day: "One game down, two games down ..." After a 37-day wait, Jackson returned against Northern Colorado determined to show the courage that had gotten him this far.

In his first regular-season game after the accident, Jackson scored 12 points and grabbed six rebounds - and did it all in front of his mother, who attended her first game since last season.

"She wanted to see me out there on the court playing good and doing well. When I showed her that, she was really happy," Jackson said. "She was upset my grandma wasn't here, but I can say that she was here in spirit with me the whole time. She's still here with me now."

It's part of the strength Jackson still carries with him.

"My Mom, since the wreck, she always will tell me poems out of the Bible. She will always read psalms to me and tell me what God doesn't like and what He wants out of a young man like me. I just have to think about a lot of stuff. She tells me if I'm doing something wrong, or if I know I'm going to do something wrong, to just ask God to protect me and my family."

It still affects Jackson today - it affects him every day.

Life never has been the same since the accident. His mother returned to the hospital a few weeks ago after experiencing severe head pain. Jackson still has a lot on his mind.

"I didn't overcome it," Jackson said. "I'm just praying right now - I hope nothing else happens to my family or my fellas out here. I just want everybody to be safe and be happy."

Right now, it's support that Jackson needs most. He's gotten much of it from coaches and his mother.

"Coaches are my Dad," Jackson said. "I didn't have a Dad growing up. My Mom - if it wasn't for her, I wouldn't be here today. They taught me a lot. They taught me never to give up."

And maybe that's the most important story of Darnell Jackson. On the court, he's never been the tallest or the most athletic. But the kid just never gives up.

He doesn't know how to.

"I've been through a lot," Jackson said, "but the coaches have done a good job of making me a better man when I get older."

"My mom told me after the wreck, when I talked to her, she told me what she said to my grandmother when they drove to Vegas. She told my grandmother she was tired and she didn't want to drive back. She said she was going to park the car in front of the casino and give my grandma money to go hit the jackpot so they could fly back.

"She told me always watch out what you say, because God is listening. She said we did fly back, but my grandma flew home in a box and my mom flew home with broken bones. So when she told me that, it just changed my whole mindset about life.

"It's just like we're fishes in a fishbowl. We eat, sleep, and swim in the earth. But all this stuff is materialistic. It's not real. We can't take none of it with us. Everybody has to be ready to go someday. You never know when you're going to go."