"We'll put this game behind us," Hallman said following Wednesday night's disappointing 69-63 loss at Kansas State, "and prepare for Baylor."

Since Baylor is the defending NCAA champion, the Jayhawks essentially are going from the frying pan into the fire.

Tipoff will be 3:05 p.m. today at the Ferrell Center on the BU campus. CSTV will carry a live telecast available on Sunflower Broadband Channel 143.

Wednesday in Manhattan, Kansas appeared headed for another lopsided loss to the Wildcats. With a little more than eight minutes remaining, Kansas State led by 17 points. But the Jayhawks rallied as Hallman scored eight of her 18 points in the last four minutes.

"We've been in that situation before, but we never gave up," said Hallman, a 5-foot-8 senior. "We kept fighting. Unfortunately, we came up short."

Twice Kansas had the ball with an opportunity to forge a tie in the last minute, but K-State held on and posted its ninth straight victory over its state rival.

Baylor, meanwhile, has captured its last six meetings with Kansas, including a 70-60 triumph last season in Lawrence. The Bears, who had a 30-game win streak halted a couple of weeks ago at Missouri, are coming off a convincing 79-64 victory Wednesday at Iowa State.

All-America candidate Sophia Young had 17 points and 11 rebounds against the Cyclones. Young, a 6-1 senior, is averaging 20.8 points game.

Oklahoma freshman Courtney Paris leads the league with a 21.4 scoring average. Young is second, and KU's Crystal Kemp is third at 19.9 points a game. 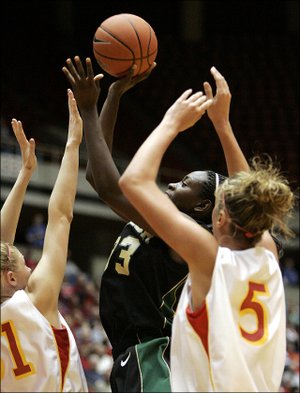 Kansas continues to lead the Big 12 in three-point shooting at 38.8 percent and in assists with 17.35 per game. The Jayhawks also top the heap in assist-to-turnover ratio. But KU is last in field-goal-percentage defense and blocked shots.

KU also continues to struggle at the free-throw line. The Jayhawks made only half their 18 charities in Manhattan and their overall FT percentage dipped to 63.5 percent. Moreover, KU has shot fewer free throws than any team in the Big 12.

The Jayhawks began with 12 consecutive victories, but they've lost four of their last five, with the lone victory coming against league cellar-dweller Oklahoma State.

KU will have two home games next week - Wednesday against Colorado and Saturday against Iowa State.