Wright named Rookie of the Week

Junior P.J. Tucker (Texas) and freshman Julian Wright (Kansas) have been named Phillips 66 Big 12 Conference Player and Rookie of the Week for games of Feb. 20-26 in voting by a panel of media covering the conference. Tucker wins player honors for the sixth time in his career, tying the Big 12 record. Wright is the third KU freshman to win rookie accolades in 2005-06.

PLAYER OF THE WEEK

Tucker led the Longhorns to two wins last week, as Texas topped Kansas State (65-64) and Kansas (80-55). The junior forward averaged 16.5 points, 10.0 rebounds, 5.0 assists and 2.5 steals, while converting 13-of-26 (.500) shots from the field. He had his 22nd career double-double versus K-State with 14 points and 12 rebounds. Against KU, he finished with 19 points, eight rebounds, a career-high seven assists and four steals. The six career Player of the Week honors ties Tucker with Marcus Fizer (ISU) and Andre Emmett (TTU) for the most all-time in Big 12 annals. Tucker has won 10 league weekly awards overall, as he was also chosen Rookie of the Week four times his freshman season.

ROOKIE OF THE WEEK 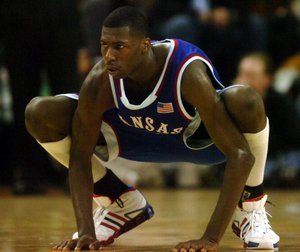 Kansas guard Julian Wright breaks down to prepare himself defensively in the second half against Texas.

Wright averaged 19.5 points and 22.5 minutes in two games, as Kansas defeated Baylor (76-61) and lost at Texas. The freshman forward shot 81.8 percent (18-of-22) from the floor over the two contests and 2-of-2 from the free throw line. His 10-of-11 (.909) effort against the Bears is the highest field goal percentage in a game by a Big 12 player this season. He had a career-high 20 points against BU, followed by a team-best 18 points at UT. He also had five rebounds, two blocks and two steals on the week. Wright became the sixth different Jayhawk this season to score 20 points in a game with his total versus Baylor.

Here's a look at this season's award-winners:

Woooohoooo Julian!!! You earned it! Keep up the good work.

The way Julian Wright played fearlessly and didn't back down from the Longhorns makes me believe he's the best freshmen of the bunch.

Julian could not have been a better pick. He has a way of giving the Hawks a boost. His dramtic slam dunks are impressive! Way to go Julian!