Norman, Okla. — Call it a miracle, call it Sooner Magic, or call it luck. Whatever it is, call it another one-point victory for No. 22 Oklahoma.

Taj Gray scored 23, including the go-ahead basket with 1:15 to play, and Terrell Everett added 12 points and 10 assists to give the Sooners a 71-70 victory Saturday against Kansas State.

It was the third straight one-point victory for Oklahoma.

"That's nuts," said forward Kevin Bookout, who had a key block down the stretch. "I don't think I've ever played in three games back-to-back-to-back where it's been one point like this. I don't know. It's weird."

Oklahoma beat Texas Tech by the same score Monday night and before that eked out an 83-82 victory against Iowa State.

"We're playing good enough to win, and that's a great attribute to have," OU coach Kelvin Sampson said. "Our kids know how to win games." 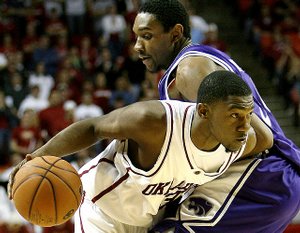 Gray hit a turnaround jumper from the left block to give Oklahoma a 71-70 lead with 1:15 left, and Bookout blocked David Hoskins' shot in the lane to give the Sooners the ball back in the final minute.

Everett let the clock run down before pushing into the lane and missing a difficult left-hander with about 20 seconds left. That gave Kansas State one final possession.

Akeem Wright took the inbounds pass with 10.6 seconds left and dribbled upcourt before passing to Hoskins in the lane. Hoskins' turnaround shot fell into Diarra's hands, but he was unable to score against Bookout as the buzzer sounded.

It was the second straight one-point loss to a Top 25 team for Kansas State, which lost 65-64 to No. 7 Texas on Wednesday. The Wildcats have now lost nine games by five points or less, surpassing the 1938-39 and 1977-78 teams for the most losses by that margin in school history.

Cartier Martin scored 26 - one less than his career high - and Hoskins added 17 points for Kansas State.