Erica Hallman was tossing up enough bricks to build a chimney.

Then the Kansas University senior rediscovered her shooting touch and scored a career-high 29 points, lifting the Jayhawks to an 81-71 overtime women's basketball victory over Missouri on Saturday afternoon in Allen Fieldhouse.

"I was getting wide-open looks and not knocking them down," Hallman said of her shooting woes. "It was technical. I wasn't snapping my follow-through."

Hallman missed 11 of her first 15 shots and appeared on her way to the worst shooting game of her career.

But she drilled six of her last nine shots and went 8-for-8 at the free-throw line during the last 111â2 minutes of regulation and the five minutes of the extra period. During that 161â2-minute span, she scored 20 of her 29 points, including 10 in the OT.

"We kept talking to her about her shot," KU coach Bonnie Henrickson said. "Once she got things going, she did a great job."

Saturday's output eclipsed the 5-foot-8 Hallman's previous career high by five points. She scored 24 in a double-overtime victory over Wisconsin in December. 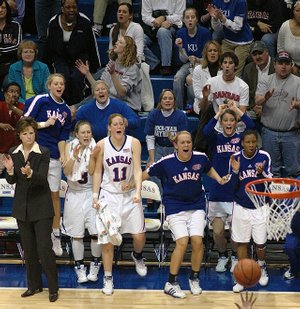 "She got a little flustered," teammate Crystal Kemp said of Hallman, "but she listened to coach. I don't think she missed too many after that."

Kemp didn't miss too many, either. The 6-2 senior produced a 25-point, 13-rebound performance. Kemp and Hallman combined for 54 points - two more than they produced in that Wisconsin game, when Kemp notched her career high of 28 points.

Hallman earned a hug from Henrickson moments after the buzzer sounded.

"I just respect her so much," the KU coach said. "I know what a passion she has for the game and how emotional she was."

Hallman and Kemp both logged the full 45 minutes. Hallman, in fact, wore out Missouri defender Tiffany Brooks, according to MU coach Cindy Stein.

"I thought she was tired," Stein said. "I thought when she was playing Hallman she was giving her too much room."

Brooks, a 5-11 junior from Leavenworth, had a heck of a day on offense, though. She matched her season high of 26 points by making nine of 12 shots and all eight of her free-throw attempts.

Missouri, in fact, matched a school record by hitting 21 consecutive free throws until Carlynn Savant missed with less than half a minute remaining in the OT.

Savant had forged a 64-all tie with 9.5 seconds remaining in regulation by canning three free throws after her forced off-balance shot from beyond the arc resulted in a foul call on KU's Sharita Smith.

"It wasn't a bad defensive play," Henrickson said. "It was a smart play on Savant's part, and Sharita got caught in traffic."

All that did was prevent Smith from earning an A-plus on defense.

Henrickson started the 5-8 junior for only the second time this season. Her job: shut down LaToya Bond, the MU point guard who had scored 31 points in the Tigers' 64-57 victory over the Jayhawks two weeks ago in Columbia, Mo.

Mission accomplished. Bond had more turnovers (seven) than points (four) and fouled out with 18 seconds left in regulation.

"I knew my job was to make her work for everything," Smith said. "I could see frustration on her face and hear it in her voice."

Three straight turnovers by Bond - one a steal by Smith - late in regulation enabled the Jayhawks to turn a 61-59 deficit into a 64-61 lead. Smith scored a mere point in 39 minutes, but she had seven assists and no turnovers and bottled Bond.

"You wouldn't look at the box score," Henrickson said, "and think she was a difference-maker. We don't win without Sharita Smith."

After Savant's three tying free throws, Missouri had the momentum going into overtime, but the Jayhawks hit the Tigers with an 8-0 jolt to start the extra period.

With Bond disqualified, the Tigers struggled on offense in the extra period, but Stein declined to use her point guard's absence as an excuse.

"LaToya is very instrumental in our sets," the MU coach said, "but I don't know if that was a key."

The victory was key for Kansas in its attempt to earn a WNIT bid. With a 16-10 record, the Jayhawks have to be in the picture, but they virtually could assure a postseason berth with a victory over Kansas State in Thursday night's regular-season finale.