Buffs shift inside to trample Tigers

Boulder, Colo. — With its primary offensive weapon, the three-pointer, ineffective and not falling, Colorado needed to change its game plan.

Switching to a more inside-oriented attack, the Buffaloes scored 44 points in the paint and got 15 points each from Richard Roby and Jayson Obazuaye to end a two-game skid with a 78-60 rout of Missouri on Saturday.

"We were seeing more than the normal amount of pressure on the ball outside," said Roby, who was 1-for-6 on three-point attempts. "When you see that much pressure out there, coaches tell us to drive to the basket. We did, and it produced results."

The rest of the Buffaloes were only 2-for-16 from three-point range.

"Our bench was a factor, because when Richard Roby is having an off night, we need to look to other people to help," Colorado coach Ricardo Patton said. "We need people off the bench to give us a lift." 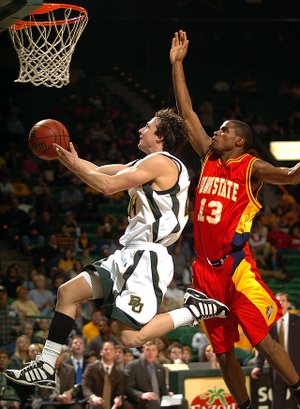 Baylor guard Aaron Bruce, left, drives for a layup past Iowa State's Rahshon Clark. The Bears won their third game of the season, beating the Cyclones, 91-73, Saturday in Waco, Texas.

The Tigers are 1-3 since Quin Snyder resigned Feb. 10 and have averaged 57.4 points during their last 10 games while going 1-9.

Mario Boggan added 17 points for Oklahoma State (15-13, 5-9), which assured itself no worse than a .500 record entering the conference tournament. Texas Tech (14-14, 6-8) shot just 37.7 percent from the field, and the Red Raiders' loss would've been worse if they hadn't made nine of 13 three-point attempts.

College Station, Texas - Acie Law scored 19, and Texas A&M won its fifth straight, giving the Aggies (18-7, 8-6) sole possession of fourth place in the conference and a boost to their NCAA Tournament chances.

season home finale for the first time since 1998.