Texas barely gets by Kansas State

Kenton Paulino never did find his touch from the field - not that anyone is likely to remember after the free-throw-shooting clinic he put on.

Paulino was 1-for-7 from the field, including 1-for-5 from long range, but he went 8-for-8 from the line, making four free throws in the final 16 seconds, helping No. 7 Texas beat Kansas State, 65-64, Wednesday night and avoid its second straight loss.

"This might be the worst game he's had shooting threes, but he did a great job at the free-throw line," Longhorns coach Rick Barnes said. "With those five assists, it was a real good night for him."

LaMarcus Aldridge had 16 points for the Longhorns, who were coming off an 81-60 loss at Oklahoma State on Sunday.

P.J. Tucker had 14 points and 12 rebounds for Texas (23-4, 11-2 Big 12), and Daniel Gibson added 13 points - but both almost undid their scoring performances by missing free throws in the final minute.

Kansas State (14-10, 5-8) lost to Texas at home for the first time in Jim Wooldridge's six seasons as coach. It was the Wildcats' sixth loss in their last eight games, five by four points or less. 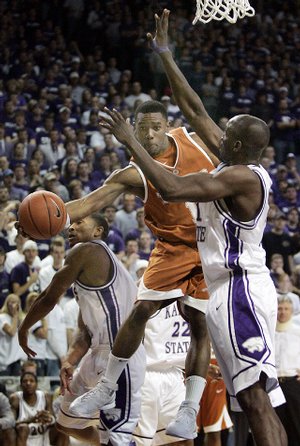 "It's frustrating," Akeem Wright said. "We fight hard out there to win these games. Losing by one points, by three points, it's tough. We've been in every ballgame, but we just haven't been able to close it out."

The Wildcats, who beat then-No. 10 Texas, 58-48, in Manhattan on March 6, 2004, almost pulled off another upset despite losing their leading scorer and rebounder to foul trouble for much of the game.

But after David Hoskins scored to cut Texas' lead to 61-60 with 3:01 to go, Kansas State didn't score again until Hoskins made a free throw with 3.7 seconds left to get within 63-61.

Tucker missed two 1-and-1 opportunities in the final minute, but Brad Buckman rebounded Tucker's second miss with 19 seconds left and passed to Paulino, who was fouled and hit both free throws for a 63-60 lead.

After Hoskins' free throw made it a two-point game, Paulino was fouled and hit two free throws with two seconds left for a 65-61 lead. Mario Taybron hit a long three-pointer at the buzzer for Kansas State.

Lincoln, Neb. - Charles Richardson Jr. scored 10 points in the first half to pace Nebraska, which opened up a 20-point halftime lead, then turned back a mid-second-half Colorado charge.

Colorado mounted a furious challenge midway through the second half, outscoring Nebraska 18-5 to cut the lead to 16. But Nebraska countered with a 7-0 run of its own to push the lead back to 23 with 7:30 left. Colorado never got closer than 18 until the final minute of the game.

Oklahoma State (14-13, 4-9 Big 12) was coming off an 81-60 rout of then-No. 6 Texas, but never came close to matching the proficiency it showed in that game. The Cowboys were sloppy with the ball, shot poorly and went nearly nine minutes near the end of the first half without scoring.