Davis shot 9-of-11 from the field and had nine rebounds.

The game was close at 45-43 with less than eight minutes to go, but Tech closed out the game on a 17-7 run. Kansas didn't score for almost five minutes during that stretch.

Before that point, the teams went back and forth in scoring, with nine lead changes and four ties.

"They're a good team," KU coach Bonnie Henrickson said. "They made us pay when we broke down offensively." 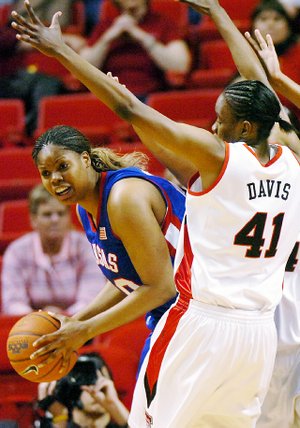 All but two points by the Jayhawks came from starters. In contrast, the Raiders' bench contributed 11 points.

The Raiders shot 48 percent from the field and 52 percent in the second half.

In the first half, Kansas jumped to an early 9-2 lead, but Tech responded with a 12-4 run that featured two three-pointers by Robertson.

Kansas will return home for its final two games of the regular season. The Jayhawks play host to Border War rival Missouri at 11 a.m. Saturday. The game will be televised nationally by Fox Sports Net.

KU then wraps up its regular season when it entertains rival Kansas State on Thursday. That game, televised nationally on CSTV, will be senior night for Brown, Hallman and Kemp.