The key word may be commitment - a feeling that Kansas University football is taken seriously at a school so renowned for its basketball tradition.

That aspect might reign supreme when examining the impact of the $31 million Anderson Family Football Complex, announced earlier this month and set to be built adjacent to Memorial Stadium by July 2008.

The convenience for the football team will help. The newness of the complex will appeal to new recruits. But the commitment factor will stand out.

Beyond the undertaking, KU coach Mark Mangino pleaded for better facilities simply to be comparable to other Big 12 Conference programs. But how do other Big 12 schools organize their setups?

"There are some elements (from other schools) that I would like to see as part of this project, maybe that I thought was a pretty good idea," Mangino said at the Feb. 5 news conference announcing the plans. "But we're going to make this KU's facility. We're not going to copycat anybody.

"We're going to put our heads together and put together a facility that is practical, very convenient for our players and that fits us here at KU - what we are, who we are. We want our own facility. We want our own signature on this building." 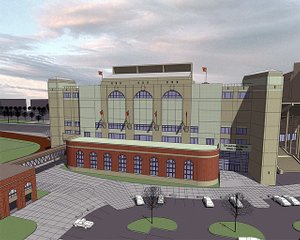 KU's plans are hazy, at least publicly, but the wheels are in motion. So far, the idea calls for at least one building to be constructed, probably south of Memorial Stadium, and will feature a weight room, offices, academic areas, an audio-visual room, meeting rooms, a cardio room, a hydro-therapy room, a nutrition area and a display area.

A practice field will be developed somewhere in the vicinity, and future plans might include an indoor facility or an inflatable bubble to be put over the Memorial Stadium field for offseason use.

So, with details still unfinished, how does KU's vision stack up? Here's how the rest of the Big 12 Conference schools organize their football operations:

The Wildcats utilize Vanier Football Complex in the north end zone of Bill Snyder Family Stadium for its centralized operations.

Originally built in 1972, Vanier grew remarkably during Snyder's tenure from 1989 to 2005 at the coach's urging. It now includes a 13,000 square-foot weight room/athletic training facility, locker rooms, an equipment distribution center, meeting rooms, a players lounge, game room, and an academic learning center. A 94,000 square-foot indoor practice facility is south of the stadium.

The wheels are in motion. So far, the idea calls for at least one building, probably south of Memorial Stadium, that will feature a weight room, offices, academic areas, an audio-visual room, meeting rooms, a cardio room, a hydro-therapy room, a nutrition area and a display area. A practice field also is envisioned, and an indoor facility or an inflatable bubble to be put over the Memorial Stadium field for offseason use could follow.

Still, more is being added. Construction is under way for a 10,000 square-foot addition to Vanier (priced at $4.3 million), which will include a hydrotherapy center, expanded KSU locker room and lounge, a new officials' locker room, and new offices and reception areas. It's expected to be done this summer.

Across the street from Faurot Field, Taylor Football Complex features meeting areas, a dining hall, a 13,000-square-foot strength and conditioning area, a sports-medicine center and academic facilities. Two outdoor practice fields are right outside, and Mizzou practices in the Devine Pavilion, which was completed in 1998 at the cost of $12 million.

MU officials aren't satisfied, either. A $16 million expansion will make the weight room, dining hall and offices even more spacious by the 2006 season.

NU currently is undergoing a massive improvement project which will include the addition of the Osborne Athletic Complex. With the completion, the Nebraska football headquarters will move from the south side of Memorial Stadium to the north side.

The Osborne Athletic Complex will have offices, a locker room, a new strength complex, athletic medicine center, hydrotherapy pools and a nutrition center.

Completed last year was a new 80,000-square-foot indoor facility that has a full-length football field and will be connected to the Osborne Complex by a skywalk. The face-lift is part of a $50 million project to enhance NU's already-impressive football complex.

Thanks to abundant space around Jack Trice Stadium, Iowa State is able to keep its football facilities centralized - the direction KU is moving toward.

In the north end zone of the stadium is the Jacobson athletic building. The 10-year old complex, which cost $12 million at the time, has offices, meeting rooms, locker rooms and an auditorium.

Nearby is an outdoor practice field, the Olsen Building, featuring strength and athletic training facilities, and the Bergstrom Indoor Practice Facility.

The CU football team calls the Dal Ward Athletic Center home, though other athletic programs do, too.

Built in 1991 at the cost of $14 million, the complex is 92,000 square feet and has an academic center, sports medicine center, weight room, dining area, locker rooms, auditorium, a lounge and offices.

It's located behind the south end zone of Folsom Field. CU has a major setback to its setup, though: Its indoor practices are next door, inside Balch Fieldhouse which, with just about 30 yards of rubber track surface to work with, one insider calls "almost worthless."

OU benefactors have made sure the Sooner football program is taken care of.

Gaylord Family-Oklahoma Memorial Stadium is surrounded by cutting-edge football facilities, including three practice fields (two grass, one turf) next to the stadium and a nearby 74,000-square-foot indoor facility completed in 2002.

In addition, the Switzer Center at the south end of Gaylord is home to centralized operations for Bob Stoops' program. It includes offices, locker rooms, an equipment room, a 13,000-square-foot weight room, an 8,000-square-foot sports medicine facility and a 7,000-square-foot legends lobby.

Behind the south end zone of the massive Darrell K. Royal-Texas Memorial Stadium (which currently is undergoing expansion to top 90,000 capacity) is the Moncrief-Neuhaus Athletics Complex.

Just a short walk away are two outdoor practice fields and a "bubble" similar to what KU brainstormed - only this is its own venue. The 69,750-square-foot facility was built for $4 million in 2002.

Oklahoma State's Athletics Center was completed in 2000 and built next door to Boone Pickens Stadium.

The center, which is in the same building as the refurbished Gallagher-Iba Arena, has a 30,000-square-foot strength and conditioning facility which includes a weight room and oval running track. A Hydroworks Therapy Pool is part of the sports-medicine facility, and locker rooms and offices also are inside.

Now, Boone Pickens is taking OSU athletics to the next level. His recent $165 million donation will help build, among many other things, a multipurpose indoor practice complex and new outdoor practice fields.

The Red Raiders centralized their operations with the completion of their football complex in 2003.

Nearby is an academic center for all student-athletes and "The Bubble," which can accommodate the football team with a 60-yard indoor practice field.

The Aggies now boast one of the best facilities in the Big 12 with the completion of the Bright Football Complex in 2003.

A&M went luxurious with its complex, including meeting rooms with 60-inch plasma screens, 28 digital coaching booths for film review and an auditorium for team meetings.

Bright also has a 6,500-square-foot locker room, an academic center and a 15,000-square-foot athletic training room, including a pharmacy, X-ray system and Hydroworx pools for rehabilitation.

Baylor's facilities are within the annals of Floyd Casey Stadium, located away from campus. They include a $2 million locker room built in 2001. Offices, training rooms, a weight room and video studio was added in 1991.

The Bears' practice fields are southeast of the stadium, though Baylor currently is raising funds for a football-operations facility that would move everything back on campus.

Adding it up, it's easy to see why KU feels an urgent need to address its football needs: Seven of the Big 12 schools are in the process of improving their facilities, and most of those upgrades come on already-centralized complexes.

While KU still has no public plan for the Anderson Family Complex, it could be a matter of picking and choosing desirable traits from other Big 12 schools - and adding a touch of KU to the finished product.

"We're not going to throw money around because somebody else has something," Mangino said earlier this month. "The basic thought that we have here and the direction we're going, we just need to have a nice, functional, clean, comfortable facility. And I'll take care of the rest."