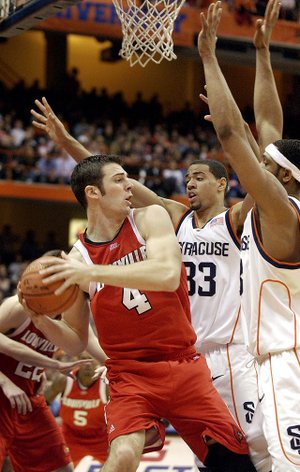 Louisville's David Padgett, left, is pressured by Syracuse's Terrence Roberts (33) and Darryl Watkins during Saturday's game in Syracuse, N.Y. Louisville announced Tuesday that Padgett would miss the rest of the season because of a knee injury.

Louisville, Ky. — Louisville center David Padgett will miss the rest of the season because of an injured left knee and is expected to be ready to play next fall.

Padgett, a sophomore, averaged 11.8 points and 6.1 rebounds in 24 games this season after transferring from Kansas. Brian Johnson most likely will start in his place tonight when the Cardinals (16-9 overall, 4-8 Big East) play host to DePaul (10-13, 3-9).

Padgett aggravated the injury in practice Monday, Pitino said. After consultation with trainer Fred Hina, it was decided to end the season and prevent further damage. Padgett will have surgery in the next few weeks, and Hina estimated recovery at two to three months.

Pitino said Padgett had been playing in pain much of the year after spraining his knee during a November scrimmage. The injury prevented Padgett from participating in practice and forced him to have treatment several times a day.