Irish fight, but fall to Huskies

Hartford, Conn. — Connecticut coach Jim Calhoun had that sick feeling in his gut.

His third-ranked Huskies were headed toward an apparent rout of unranked Notre Dame on Tuesday night when it suddenly unraveled.

The Fighting Irish showed why they were the best three-point shooting team in the conference and hit four threes in a 25-2 run to erase a 19-point second half deficit in a hurry. The Irish had their first lead midway through the half, and Calhoun quickly called a timeout to gather his shaken team.

"They were stunned. It happened so quick," he said. "We shut the engine off and stopped playing."

Then, it was the Huskies' turn to rely on their strength - the inside game. UConn finished with a Big East record 19 blocks, pounded the ball inside down the stretch and, after Marcus Williams' bank shot sent the game into overtime, the Huskies escaped with a 75-74 victory.

Silenced by the Notre Dame's rally, the sellout Hartford Civic Center crowd of 16,294 was deafening in the overtime period.

"(Notre Dame) had every right to win that game just as much as we did," Calhoun said. "We had to will our way back in. Thank God it was here at the Civic Center. I'm not sure we could win that game on the road." 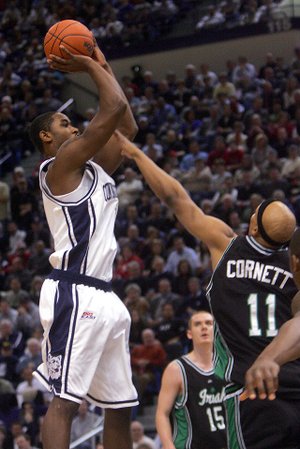 Williams finished with a triple-double for UConn, which sent Notre Dame to yet another close loss. The Fighting Irish (13-11, 4-9 Big East) lost by an average of 4.3 points in their previous 10 defeats and now are 1-6 against ranked teams this season.

Hilton Armstrong blocked seven shots and hit a pair of free throws late in overtime to put UConn ahead. Rudy Gay came down with a key defensive rebound as time expired, helping the Huskies (24-2, 11-2) hang on after blowing the big lead.

Williams finished with 18 points, 13 assists and 10 rebounds for the sixth triple-double in school history and first since Emeka Okafor in December 2003 against Army. His 10th rebound was the most important. With time running out in regulation, Williams scooped up a miss from Gay along the baseline and banked in a runner to tie it at 71 and send the game into overtime.

Ann Arbor, Mich. - Daniel Horton scored 25 of his career-high 39 points in the second half for Michigan.

"He was phenomenal," Michigan forward Graham Brown said. "Without him, we wouldn't have been anywhere near them. Tonight, he had it right from the start."

The Wolverines (18-7, 8-6 Big Ten) snapped an 11-game losing streak against Illinois, dating to January 2000. Michigan coach Tommy Amaker got his first win against Illinois in 13 games, including his time at Seton Hall.

Sean Singletary added 16 points for Virginia (14-10, 7-6 Atlantic Coast Conference). The Cavaliers were 12-for-21 on three-pointers and shot 52 percent overall. Craig Smith led Boston College (21-6, 8-5) with 22 points and nine rebounds and joined Danya Adams as the only Eagles players with 2,000 points and 1,000 rebounds.