Baylor University's basketball team opened its 2005-06 season Oct. 15, just like everybody else.

But the Bears didn't play their first game until Jan. 11 - two months later than the other 333 schools in NCAA Div. I.

"What was the deal with that?" Kansas University freshman Brandon Rush asked before practice Monday.

Well, the delay was due to a harsh NCAA penalty for violations committed under the watch of former coach Dave Bliss. As a result, Baylor was banned from playing a nonconference schedule.

"I'm a positive and optimistic person," third-year Bears' coach Scott Drew said, "but it's really hard to find positives and optimism in not having a nonconference schedule, especially with our situation."

Sasha Kaun gets hacked by Baylor's Tommy Swanson in the second half.

The Bears, who dropped their first six league games before winning at home in overtime against Kansas State, rely heavily on four freshmen.

Baylor's "Freshman Four" of Mamadou Diene, Henry Dugat, Jerrells and Kevin Rogers account for 50 percent of the squad's points, 52 percent of rebounds, 51 percent of assists and 51 percent of minutes played.

That's learning on the job, without the benefit of nonconference contests.

Self said the Bears, who enter on the heels of Saturday's 64-60 loss to Texas A&M, had done mighty well, under the circumstances.

"I'd say based on where they started and the scores, they've come a long way," Self said. "They've come from being a team hoping to play well to a team that expects to play well and win. They are talented. They are time away from making a dent in this thing."

The Jayhawks, who are tied with Texas atop the league standings at 10-2, realize they must take care of business against BU tonight to make Saturday's game at Texas a true showdown. Texas travels Wednesday to Kansas State. 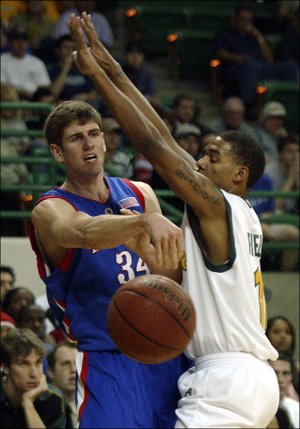 Christian Moody passes around Patrick Fields for one of KU's 24 assists against Baylor.

"We can't take anybody lightly," Rush said. "If we win, then we've got a tough game against Texas coming up. It's how we get fired up about it. We're going for a championship. We need to win all our games."

Including one against a team that has played just 12 games compared to KU's 25.

"That would really have been tough," freshman Mario Chalmers said, putting himself in Baylor's shoes. "You've got to adjust to college level of basketball, especially being a freshman. For me, as the season went along, I became more confident. Nonconference games helped out a lot. I'm sure they have a lot of talent, and they'll come out ready to play a good game."

I feel bad for Baylor. The kids there now got suspended for something they didn't even do. The murder of Patrcik Denehy happened two years ago. The NCAA should've fined Baylor, not punished innocent players.