Kansas University freshman Brandon Rush, who can take a joke, was amused by signs held high by Missouri students before the KU-MU basketball game Jan. 16 in Mizzou Arena.

"The main one I remember is, 'Rush can't read,'" Rush, a 6-foot-6 guard/forward from Kansas City, Mo., said with a smile. "They spelled 'can't' wrong. I forget how they spelled it, but they spelled it wrong."

Rush, who scored 14 in the Jayhawks' 89-86 overtime loss to the Tigers, wasn't bothered by the attention. He realizes MU fans were venting frustrating about his choosing KU instead of Mizzou, where his brother Kareem starred in 2000-2002.

"It didn't bother me at all," said Rush, admittedly looking forward to Saturday's rematch versus the Tigers at 2:45 p.m. in Allen Fieldhouse. "People don't know me. They are going on what they hear."

The Border Showdown in Columbia was memorable for Rush, who was involved in one of the biggest plays of overtime.

With KU down, 88-86, he drove the lane and, instead of shooting, made a bullet pass to Darnell Jackson, who was guarded down low by Jimmy McKinney and Kevin Young. Jackson fumbled the ball and fouled McKinney, who made one of two free throws with two ticks left.

"I wish I would have shot it," Rush said. "I'd like to go back in time and play that over again. I'd shoot it, definitely. I'm more confident now than I was then."

Rush, who has been called a "sponge" by coach Bill Self for his willingness to learn, said he learned a lesson watching the replay of his turnover.

"We went over it twice on tape. Coach Self kept rewinding," Rush said. "I need to shoot that. I need to step up and try to make the big play at the big time."

In that situation, Self wanted Rush to shoot.

"You've got to drive it to score. He chose to pass," Self said. "That didn't cost us. What cost us is at the end of regulation, we didn't execute."

KU blew a five-point lead in the last 29 seconds.

"I think it's a little more payback. They got us the last time," Rush said of Saturday's game. "It was our last loss. We're playing better as a team now." 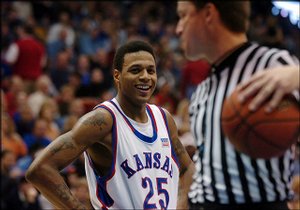 Brandon Rush laughs with a referee during a freethrow in the second half of the KU-Texas Tech game.

KU leads for Arthur: KU has emerged as the team to beat for Darrell Arthur, a 6-foot-9 senior forward from Dallas South Oak Cliff High. Arthur tells rivals.com he's eliminated Indiana following the announcement that Hoosier coach Mike Davis was out after this season.

Arthur said KU, Baylor and SMU were the schools he currently was considering, but UConn, Oklahoma and Texas are starting to show interest. He has taken official visits to KU, Indiana, North Carolina, SMU and Baylor and still plans to take another unofficial visit to Mount Oread.

"KU is at the top of my list. I really like the coaching staff at Kansas, and they are cool with the players," Arthur said. "I also like KU because they have good freshmen and they are playing good ball right now. I feel that I could come in next year and produce a little bit for Kansas."

Self speaks about Sutton: KU coach Bill Self on one of his mentors, OSU coach Eddie Sutton, who announced late Wednesday he would check into an alcohol-rehabilitation center in the wake of Friday's car crash that forced him to leave the team for the rest of the season:

"It saddens everyone in the coaching profession that knows coach (Eddie) Sutton that he is taking a medical leave of absence for the rest of the season. Coach has meant so much to so many, and it was indeed an honor to be a part of his staff during the early 1990s," Self said.

"Coach Sutton is a Hall of Fame coach with Hall of Fame credentials. Most importantly, we hope coach addresses his health issues and is feeling much better in the very near future. Our league will certainly miss not having him on the bench the rest of the season, but Oklahoma State is in very capable hands with Sean (Sutton) coaching and the experienced staff on board."

I thought that with Mike Davis leaving Indiana at the end of the season, that might give us an advantage to get Arthur. I mean, come on, Baylor or KU? I hope that he remembers who has been recruiting him since the beginning, not UConn, OU, or Texas. Come on Darrell, you'll like it here.

Exactly Ron, Arthur needs to look and look at the youth on our team, it's not like the guys we have nw are going to be seniors and juniors and he will never see the floor. Baylor over KU, ya I am not sure on that either.

I just think it's amazing how different the roads taken were after the first KU/MU game were, Mizzou, nonexistant anymore and KU on track to win the big 12.

Amen to that. It will be interesting to see what happens to our loser pals across the border. Missouri isn't a top tier program and it cracks me up how some diehards are screaming Bring back Norm! He made things fun, but I don't see how you can be considered great without a Final Four apperance. It reminds me of Illinois and why Self left. A very strong school, but not in the same league as Kansas, Duke, Kentucky, N...etc.