Keegan: Chalmers can take the heat

Long before the trash-talking escalated in Kansas University's 88-75 Saturday afternoon victory over Iowa State, the loudest, angriest words had been spoken by a man wearing sneakers and a suit and tie.

Bill Self grabbed baby-faced freshman Mario Chalmers by the arm during a timeout and gave him as public a tongue-lashing as he's given a player all season. A minute later, Self removed Chalmers from the game and sent more high-voltage words into his face.

And when the day was done, Chalmers had given his coach another clutch effort, scoring 16 of his career-high 23 points in the second half. He also had five rebounds, four assists and three steals. Chalmers was charged with one turnover in 36 minutes and for the second game in a row repeatedly hit three-pointers when the game got close in the middle of the second half.

"He knows I can take it," Chalmers said of Self.

Besides, he figured, it's not as if he didn't deserve it.

Chalmers and teammates weren't ready to go when the bell sounded, and they had to sprint back from an 8-1 deficit. The sluggish start put Self in a cranky mood. 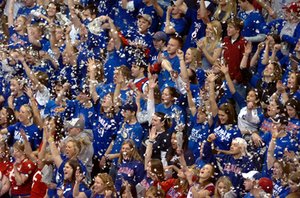 Most celebrity coaches, asked about yelling at players, will respond with a lame attempt at humor, such as "We were just discussing how his classes are going," and the assembled media will laugh that nervous laughter, having survived asking the difficult question.

Self's more approachable than most, in that nobody has reason to be nervous about asking him any question. Ask it, and he'll answer it in a way he answered a question about him letting Chalmers have it.

"It's nothing personal," Self said. "One thing about it, when I get on someone, it's forgotten about in 15 seconds, and if they hang onto it, that's their fault. If I can forget it, they should be able to forget it, too. He's done a real good job with that."

"Mario's used to it," KU's Brandon Rush said. "He gets yelled at a lot, more than anybody else. He just comes back in and plays his game."

Overall, the three freshmen again showed what all the fuss was about when they and defector Micah Downs formed what was ranked the nation's top recruiting class.

Rush arrived with the most mature, stable game. Chalmers has joined him, and Julian Wright, despite his tendency toward wild plays, has been the team's next-most-productive player.

"He's shooting the ball way better, and he's a lot calmer since he moved to shooting guard from point guard," Rush said of Chalmers' improvement.

Self finds himself checking his swing at times when he initially thinks he has reason to be upset with Chalmers.

"Mario's one of those guys who sometimes drives coaches nuts, not in a bad way, but because he's a smooth player," Self said. "Smooth players sometimes look like they're not going quite as hard as what you want them to go because they're smooth. I'm learning more and more about him, but I think he's playing oh-so well, and he's shooting the ball a lot better."

And his skin is plenty thick.