With an 86-57 rout of Kansas University on Wednesday night, No. 9 Oklahoma became the first team in Big 12 Conference women's basketball history to open with 10 league victories. The Sooners were the only previous team to start 9-0, having done so in the 1999-00 season.

"I'm really proud of it," Coale said. "I hesitate to talk about it too much, though, because we're a greedy sort in this profession. Ten is not enough. We need 11. We want to do it all perfectly, and then we never want to lose again. It's funny how that works.

Oklahoma (20-4, 10-0) has won by an average of 17.3 points in their conference victories this season and will take an eight-game winning streak into a showdown at home Sunday against defending national champion and No. 12 Baylor, a team the Sooners beat in Waco, Texas, on Jan. 21.

The Sooners have won at least 20 games five times in Coale's 10 seasons as coach.

Oklahoma beat Kansas (14-7, 3-7) with balance, as all 11 Sooners who suited up scored, but there was no doubt who the star was. Freshman center Courtney Paris had 18 points and 12 rebounds, setting a Big 12 single-season record with her 21st double-double. She eclipsed the previous mark, set by Iowa State's Angie Welle during the 2000-01 season.

Paris, who played only 25 minutes, also extended her streak of consecutive double-doubles to 16, the nation's longest current run and another Big 12 record.

Crystal Kemp, who drew the assignment of matching up with Paris, scored 21 points to lead Kansas, which has lost seven of its last nine games after a 12-0 start. The Jayhawks are 0-5 on the road this season. 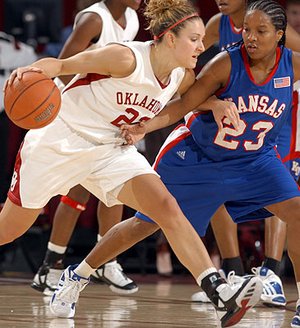 The key to Oklahoma's win was simple: The Sooners committed only one turnover in the first half and finished with only six -- 12 under their season average -- while they recorded 20 assists on their 36 field goals.

Coale called it "one of our cleanest offensive performances of the year. We shared the ball well and played together. The guys that came off the bench gave us valuable production. Once we slowed Kemp and (Erica) Hallman there in the first half, we were able to blow out on a lead and relax."

It didn't take long for Oklahoma to establish its dominance. The Sooners trailed only in the opening moments, and used a 9-0 run to take an 11-4 lead 5 minutes into the game.

Kansas pulled within one point on two occasions, the last time at 17-16, but Oklahoma scored the next 10 points -- including two 3-pointers by Laura Andrews.

Chelsi Welch had eight of her 13 first-half points and Leah Rush scored six points in a 14-3 Oklahoma run near the end of the half. The Sooners led 45-27 at the break. 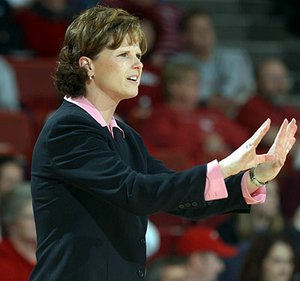 Kansas women's basketball coach Bonnie Henrickson gestures to a referee after a call went against her team in an 86-57 loss to Oklahoma. KU fell Wednesday in Norman, Okla.

Kansas, which picked up 18 points from Hallman, came no closer than 18 points in the second half. Oklahoma's lead peaked at 30 points.

"It's impossible to beat a team of that quality if you don't pressure and create some opportunities for yourself in transition," Kansas coach Bonnie Henrickson said. "We just dug ourselves a hole."

The Sooners shot 50.7 percent from the field and took 18 more shots than the Jayhawks.

Welch, a junior guard, had 16 points, while Rush and seldom-used reserve Krista Sanchez added 10 points each for Oklahoma, the latter on 5-of-5 shooting.