Not many, if any, fans had headed for the exits.

Nobody on Kansas University's basketball team officially had thrown in the towel.

Yet to players, coaches and spectators alike, things sure didn't look promising with 9 1â2 minutes to play Sunday in Allen Fieldhouse, with the young, unranked Jayhawks trailing an experienced, No. 19-rated Oklahoma team by 16 points.

"We were just about dead, but the guys didn't quit," KU coach Bill Self said after his squad rallied furiously down the stretch to claim a pulsating 59-58 victory.

The rally from a 50-34 deficit was three points shy of KU's biggest comeback victory of all time. KU, which wiped out a 16-point deficit in a home victory over Georgia Tech last season, erased a 19-point deficit against UCLA in 1995, also at the fieldhouse.

"We had a bunch of young kids battling and hanging in there. Young kids aren't supposed to be as tough as we were today," Self added, elevating KU's freshman class to "sophomores at the least." 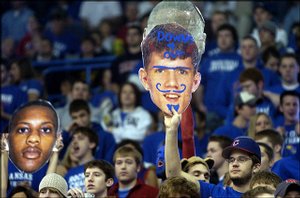 Freshman guard Brandon Rush, who was ineffective the first half after getting poked in the right eye by OU's Terrell Everett, scored 10 points in a 19-3 run that tied the score at 53 with 2:59 left.

"I thought the game was about done," Rush said after scoring 18 points, 12 the second half once his blurred vision cleared. "We had big doubts about coming back. Then the shots started falling, and we picked it up on defense."

It was the defensive work of Rush, KU's leading scorer, that eventually saved the day.

KU led, 59-58, with 19 ticks to play following a running jumper by Mario Chalmers, which immediately answered a three by Michael Neal at :27.

"It was the biggest shot of my career," Chalmers said.

The slim lead then was protected by the 6-foot-6 Rush, who blocked a straight-on 12-footer by Everett with seven seconds left.

"I think it was the biggest play of the game," said Rush, who said "yes," when Self asked if he had enough energy to take a turn guarding the 6-foot-4 Everett down the stretch.

"I thought he was going to drive. He pulled up for the shot. I tried to contest it. I was able to get a block."

Everett, who scored 14 points off 6-of-19 shooting, grabbed his own rebound and horsed up another outside shot. That one from the wing missed.

The rebound went to Rush, who was tied up by OU's Neal with 1.6 seconds to play, KU still up by one.

"We talked to our guys and told them that (OU) had the possession arrow, and do not let them tie you up," Self said. "If we would have batted it to halfcourt or anything, we would have won the game right there.

"OU did a good job tying it up. It wasn't Brandon's fault. There wasn't much he could do."

Visibly upset, Rush tossed the ball into the air instead of handing it to a ref after seeing the possession arrow go OU's way for one final play.

"I'm surprised I didn't get a technical. I got real mad. I thought it was a foul," Rush said.

"They made us sweat. It's a good thing we still had a foul to give," Self said.

It was good for KU, because the in-bounds pass with just under two seconds left went to OU big man Taj Gray (13 points, 12 rebounds), who was hacked before shooting by C.J. Giles.

The clock was stopped with one tick left, and OU again received the opportunity to in-bound.

"Coach at first started talking about, 'Foul him (if a Sooner gained possession in scoring position).' Then he changed it and said, 'Don't foul,''' Giles said. "I saw he was wide-open. They weren't in the bonus, so I had to get it (foul) for the team."

Self said he didn't want to risk a Jayhawk fouling a Sooner while putting up a shot, so upon further review dismissed the foul strategy.

It all came down to an eventful final second.

OU's Neal accepted an in-bounds pass and fired a three from the corner in front of the Sooner bench. The shot, which fell way short, was well defended by KU's Russell Robinson.

Neal said he felt contact on the shot, but "wasn't expecting a call."

"I didn't touch him," Robinson countered. "I wanted to be out there on him close. I knew he had only one second to put up a shot."

A key on the play was Giles - who had three blocks in 12 minutes with at least five altered shots - denying an inside in-bounds pass to Gray.

"We put C.J. on the ball to take away the throw to the rim," Self said. "That is what they tried to do the time before. Russell didn't do a great job on Neal on the play. It wasn't a good look, but he got off a look. We thought they would throw it to the basket. Fortunately for us, they threw outside, and he missed it so I'll say it was good defense."

"Brandon had used a lot of energy. The last five or six minutes I asked him could he do it? He said yes," Self said. "That may have been as big a difference in the game. He (Everett) didn't score again after that. He didn't get a decent look after that."

Rush, who is known for scoring, accepted praise for his defense on Everett, who didn't score the final 12 minutes.

As a result, KU won its fifth straight game, grabbed sole possession of second in the conference and claimed its first single-digit victory of the season.