It took theatrics, but Erica Hallman made sure to get the job done in the final seconds of Saturday's game against Iowa State in Allen Fieldhouse.

With the game tied at 64 and seven seconds remaining, the senior guard came around a screen and put a "giant killer" off the glass -- a shot so high that no one could block it -- and crashed to the floor behind the basket.

The dramatics worked. Though the shot didn't fall, Hallman did get a foul call with 5.5 seconds remaining and made one of two free throws in Kansas' 65-64 victory.

"I didn't get fouled too hard," Hallman said, "but it was enough. They called the foul, so it worked. Whatever works.

"Maybe a little bit of acting. I usually don't. They usually call some of the fouls for me if I go to the hole, and they called that one."

On Wednesday against Colorado, Hallman passed up a last-minute shot to try to get the ball to teammate Crystal Kemp.

This time, after a timeout, KU coach Bonnie Henrickson made sure the team's best clutch shooter didn't give it up.

"I said, 'Get it to the rim and get it off the glass," Henrickson said. "I didn't even say pass it."

Iowa State had one last opportunity, but a three-quarter-court heave was stolen by Taylor McIntosh. The sophomore leapt for the ball even though she was the last defender between the Cyclones and the basket. 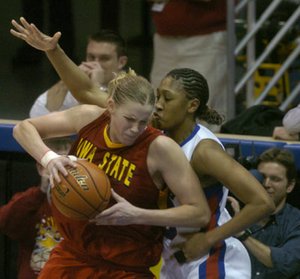 "I was like, 'I've got to outjump everybody and get to this ball,'" McIntosh said. "Luckily, I came down with it."

The victory snapped KU's three-game losing streak, which included a 50-point loss to Baylor and a home loss to the 6-14 Buffaloes.

The Jayhawks nearly saw another one slip away Saturday after jumping out to a 48-29 lead with 17:20 remaining in the second half.

Without top scorer and NCAA assist leader Lyndsey Medders, Iowa State reeled off 17 straight points during the next five minutes to pull within two.

"It was more frustration than anything," Kemp said, "because we knew what they wanted to do, and they were still getting looks."

The key stretch for KU came at the 4:56 mark when Kemp picked up her fourth foul and was sent to the bench. The Jayhawks went on a 7-0 run without their best player, taking a 64-58 lead on Kaylee Brown's three-pointer from the left side.

Brittany Wilkins' layup tied it at 64 with 13.1 seconds remaining before Hallman's free throw clinched it.

Kemp led Kansas with 19 points and 10 rebounds. Brown added 16, while freshman guard Ivana Catic gave one of her best performances of the year with 15 points, seven assists and just one turnover.

Kansas will play Wednesday at No. 11 Oklahoma with hopes of a postseason berth still on the line.