These walls can talk - of KU sports

The late Waldo "Bud" Monroe, a barber and campus police lieutenant, received enough pictures from Kansas University athletes over several decades for his own hall of fame.

Scores of the photos still line the walls of the now empty Bud's Barber Shop, 532 Mich. Bud's barber chair remains in one corner as cob webs have formed around it.

"It used to give him just the biggest smile when the guys would give him a picture," said Walda Monroe, Bud's daughter.

Monroe cut hair for them and his other customers in the community for 43 years, his daughter said. His shop doubled as a place of congregation for talk and domino games, said his brother, Leonard Monroe.

"The barber shop, when everybody came together, it was kind of special," Leonard Monroe said.

Before he became too ill, Bud Monroe got his picture taken with basketball great Michael Jordan when Jordan was in town for a golf outing with former KU basketball coach Roy Williams.

Darryl Monroe, Bud's nephew and Leonard's son, the center fielder for the 1993 KU baseball team that reached the College World Series, has his place on the wall.

But one photo is missing. Wilt Chamberlain's picture had hung on the top row, the third one from the door. The Monroes recently packed it away for security purposes.

"He was the third one right there," Walda said and pointed to the empty space.

"He was dunking the basketball," Leonard Monroe said.

Chamberlain's presence in the shop brought life to the place, even if the KU basketball star in the 1950s tried not to make a fuss, Leonard Monroe said.

"Wilt wasn't the type of person that liked to draw attention," he said. 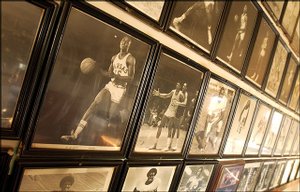 Among the list of Jayhawk greats to visit Bud's was Jo Jo White, pictured left along with other KU athletes.

But at 7 feet 2 inches tall, Chamberlain was an odd fit in Bud's chair.

The domino games and the chatter around the shop brought Chamberlain and other KU athletes to enjoy the atmosphere. Even after he left KU, Chamberlain would often visit Bud Monroe.

"He always stopped in the barbershop every time he came through here to see Bud," Monroe said.

Bud Monroe's skills as a barber weren't the only thing that kept generations of Jayhawks and others from stopping in, his daughter said. 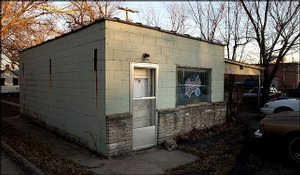 "He was a people person. He loved people - everybody. No matter who they were or what they were. He enjoyed them," Walda Monroe said.

Now, as the shop sits empty and quiet, she said she hoped her sons eventually would pick up their grandfather's business.

"It really would be nice to see it all resurrected again," Leonard Monroe said.