Saturday it was a 50-point thumping at Baylor. Wednesday night it was a 77-71 loss to lowly Colorado in Allen Fieldhouse.

With their sixth defeat in the last seven games, the Jayhawks' record 12-game, season-opening win streak seems like something that happened during the Bronze Age.

"Giving 77 points at home is incredibly disappointing," KU coach Bonnie Henrickson said. "To score 71 at home and not find a way to win is frustrating."

Everybody knows what the problem is. The Jayhawks can't stop Big 12 teams from making baskets. KU went into Wednesday's game ranked last in the league in field-goal-percentage defense and allowed Colorado, one of the conference's worst shooting teams, to make 62 percent of its shots. 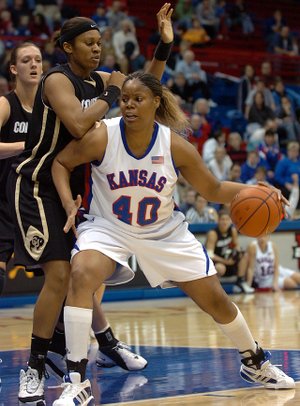 Kansas University's Crystal Kemp (40) drives against a Colorado defender in the Jayhawks' 77-71 loss. KU fell to the Buffs on Wednesday in Allen Fieldhouse.

"It's frustrating we don't show enough intensity to win," said KU senior Kaylee Brown, who scored a career-high 24 points. "We should have shown them that what happened at Colorado never should have happened, but we didn't."

Kemp wasn't clicking Wednesday night. She had 17 shots, but made only seven of them and settled for 15 points, four below her average.

Erica Hallman was close to her scoring average with a 14-point night, but she missed eight of 14 shots. Taylor McIntosh picked up some of the slack with 10 points - as many as she had scored in the previous six games combined - but the bench was virtually barren in producing just four points, all by Shaquina Mosley.

"Our bench has got to get better," Henrickson said. "We're not getting enough production. That's been our Achilles heel all year." 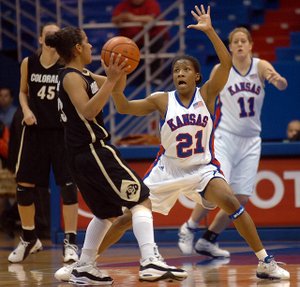 Dow contributed 11 points and 11 rebounds and arguably the biggest steal of the night. With the Buffs clinging to a 72-69 lead and just under three minutes remaining, KU's Brown appeared to have retrieved an errant shot, but Dow stole the ball for an easy stick-back.

"She kicked her foot at it, and we don't get the call," Henrickson said. "That was a big possession for us."

Still, twice with less than a minute remaining, the Jayhawks clawed within three points again, but the Buffs didn't panic. They cashed nine of 10 free throws down the stretch.

Henrickson had been convinced her team would show renewed resolve Wednesday in the wake of Saturday's 90-40 loss at Baylor, but the Buffs made two of every three shots in the first half (16 of 24) and stormed to a 40-28 lead at the break. 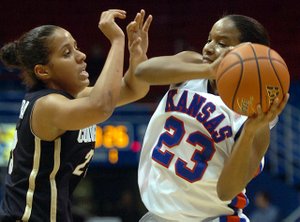 "This was a chance to redeem ourselves," Henrickson said. "I thought this game couldn't have come at a better time."

Better times may be ahead, but none of KU's remaining eight games will be against a team with a losing record.

"Everything from now on is a must win," Kemp said. "We've got to keep our heads up."

The Jayhawks will play host to Iowa State at 1 p.m. Saturday.

Notes: KU's 22 rebounds were a season-low. Colorado had 29 boards, but only four on the offensive end. : Torrid shooting - 62 percent from the field and 82.6 percent from the foul line - enabled the Buffs to overcome 20 turnovers. : Crystal Kemp extended her streak of consecutive double-figure scoring games to 20. : KU point guard Ivana Catic scored only four points, but her nine assists were one off her career high.