A class with class

In the mud-slinging world of college football recruiting, Kansas University somehow emerged from the struggle without a speck of dirt on its jersey this year.

KU coach Mark Mangino announced the signing of 21 high school seniors to letters of intent Wednesday afternoon. What's impressive is that nobody who committed to the Jayhawks in the last nine months ended up going somewhere else - a rarity, considering the booming trend of recruits flip-flopping their commitments in recent years.

"I think we took some extra precautions to deal with kids of character," Mangino said. "Character is an important factor in our signing of players, there's no question."

Ability doesn't hurt, either, and KU clearly is starting to progress in terms of the talent level of its recruiting classes.

Kansas went coast to coast in search of the right fits for its program this recruiting season, getting players from California (Carl Wilson, Rameses Arceo), Florida (Jeremy Terry, Tertavian Ingram) and across the Midwest in states like Colorado, Oklahoma, Kansas and Missouri. 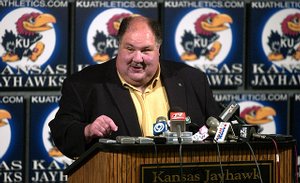 Kansas University football coach Mark Mangino found plenty to smile about when revealing his recruiting class. Mangino announced a class of 21 players - 25 including the four early signees - at a news conference Wednesday in Hadl Auditorium.

The most-used pipeline, though, was Texas, from where nine signees hail. Among them is Anthony Webb, a 6-foot cornerback ranked highest among all of KU's recruits by Rivals.com.

"He's really a good-hips, quick-feet, great-change-of-direction guy that you need," Mangino said. "He has a lot of fight in him, a lot of competitive spirit."

Webb is one of four cornerbacks signed by Kansas. He and the others - Rockhurst High's Phillip Strozier and junior-college transfers Blake Bueltel and Mike McCoy - certainly will get the opportunity to contribute early. Kansas has just one cornerback left from last season, Aqib Talib, while players like Charles Gordon, Theo Baines and the Amadi brothers are no longer around. 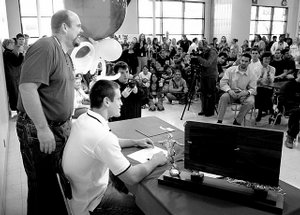 Salina Central's Jake Sharp, seated left, addresses a crowd gathered to witness his signing of a national letter of intent with Kansas University. Sharp held his signing ceremony Wednesday at his high school.

"We graduated three corners. Go out there and seize the moment. Go out there and compete," Mangino said. "We're not selling any of those kids short. When we recruited them, we told them, 'Nobody's got a job penciled in stone opposite Aqib Talib, so let's go out and compete.'"

While the Jayhawks avoided the recent trend of "de-committing" this go-around, one surging trend they benefited from this year was the early graduation of two high school seniors. Quarterback Todd Reesing and strong safety Olaitan Oguntodu, both Texas natives, wrapped up high school in December and already are on campus.

Because of that, both will take part in spring drills, which start next month, and get a head start on the academic load of college.

"That's an enormous advantage," Mangino said. "I'm not a big fan of high school kids coming out early. I've never encouraged a prospect to do that. I think the senior prom and all those things ought to be a part of being a senior, and you're only a senior once. But (Reesing) is ready for the jump."

Reesing and Shawnee Mission West's Tyler Lawrence are the two quarterbacks of the class, which, with the four December junior-college signees, totaled 25 players.

Now comes the waiting game. Some recruiting services rank KU's class around 35th nationally among the 119 Division I-A programs. But the real report card is years away, on the playing field at Memorial Stadium.

Still, judging by who's listening, who's committing - and who's sticking to his word - Mangino is pleased with his program's progress once again.

"Just like everything else in our program is improving each year," Mangino said, "so is the recruiting,"