STILLWATER, OKLA. — During his final timeout, Nebraska coach Barry Collier reminded his team to think about a quick rebound.

His advice paid off.

Jamel White put back a missed three-pointer by Wes Wilkinson with 1.1 seconds left, lifting Nebraska to a 59-57 victory Tuesday against Oklahoma State.

With the game tied at 57, Nebraska set up the final play when guard Charles Richardson called a timeout with 5.9 seconds remaining. The plan was to get Wilkinson the ball, but Collier said he reminded his players to be ready for a putback.

"I thought Wes made a great catch and tried to get balanced to shoot the ball," Collier said. "We told the other four that even if it went as planned, they would have time to go rebound a miss." 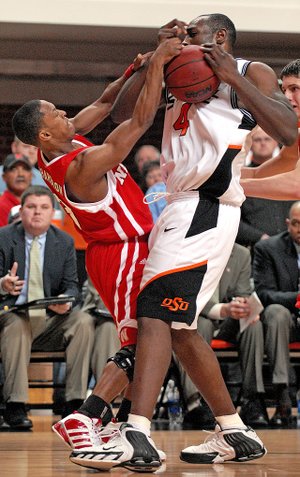 The Cornhuskers (14-6 overall, 4-3 Big 12 Conference) scored the final six points to rally from a 57-53 deficit in the final 1:41. Wilkinson, who led Nebraska with 19 points, hit two free throws, and Jason Dourisseau tied the game on a dunk with 58 seconds left.

"When we were down six points late in the game, we didn't lose our heads and turn the ball over a lot," Wilkinson said. "We kept on battling defensively and took care of business.

After committing the turnover that set up Dourisseau's dunk, JamesOn Curry missed a three-pointer that would have put Oklahoma State (12-9, 2-5) back in the lead with 35 seconds left.

Curry finished with 22 points, including six three-pointers, and Mario Boggan had 13 points and 10 rebounds for Oklahoma State before fouling out with 1:20 left. The Cowboys have lost four games in a row for the fist time since the 1991-92 season.