A college basketball team representing the smallest state in the Union claimed one of the biggest upsets in NCAA Tournament history nine seasons ago.

The game, one of the most demoralizing in Roy Williams' 15 years at KU, concluded the careers of seniors Raef LaFrentz and Billy Thomas, who won 123 games against just 17 losses but never reached a Final Four.

"You are calling to re-live that moment?" Ryan Robertson, a junior starter in that game, asked incredulously after answering his cell phone in St. Charles, Mo., where he now works as regional marketing director for Hartford Mutual Funds.

"Besides the Arizona game, that's the worst experience I ever had at KU. Why would I want to re-live that?"

Informed the two schools would be meeting at 7 tonight in Allen Fieldhouse for the first time since 1998, media favorite Robertson gave in and re-hashed the day Rhode Island guards Cuttino Mobley and Tyson Wheeler combined for 47 of the Rams' 80 points on 8-of-20 three-point shooting.

"It was the final game to what was a great year that ended horribly," said Robertson, a key cog on a KU team that went 35-4 and lost just one game in Big 12 Conference play. Rhode Island, 25-9, fell to Stanford, 79-77, in the Elite Eight.

"We were in a great position to go to the Final Four and do some things the previous year's team didn't get a chance to do. We were ready to do it, but as usual ran into a team that got hot at the absolutely best time for them and worst time for us." 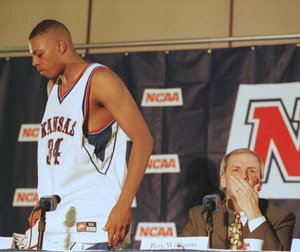 Roy Williams, right, fights back emotions as Paul Pierce, left, leaves a news conference after the Jayhawks' NCAA Tournament loss to Rhode Island on March 15, 1998. It was Pierce's last game at Kansas University.

The Pierce- and LaFrentz-led Jayhawks were hoping to roll to the Final Four one year after their 34-2 team lost to eventual national-champ Arizona in the Sweet 16.

"I saw coach Williams, C.B. (McGrath) and Jerod (Haase) last week when North Carolina played in St. Louis," Robertson said of his former coach and teammates who now work at the University of North Carolina.

"C.B. and I were rehashing memories. He said the reason they won a national championship at North Carolina is Sean May put his teammates on his back and willed them to win.

The Rams, who tied for second in the Atlantic-10 East division with a 12-4 record, had two guards step up on a night KU bricked 23 of 28 three-point attempts.

"I think it's the best tandem we faced all year. They had that deadly combination, really quick guards but ones you can't leave alone," Robertson said of Mobley, an eighth-year pro with the NBA's Los Angeles Clippers, and Wheeler, a second-round NBA draft pick who played one game with the Denver Nuggets and currently competes overseas.

The 6-foot-4 Mobley scored 18 points the second half while being guarded by the 6-7 Pierce. Tiny 5-10 point guard Wheeler also wasn't fazed by the 6-5 Robertson.

"Their guards were very very good. You have to congratulate them," KU coach Williams said after the game.

Of course, it wasn't all about congratulating the Rams. After losing as a No. 1 seed to Rhode Island, Arizona and UTEP (1992), KU had soul searching to do as a program.

"In the regular season, we beat everyone," LaFrentz, who is now with the Portland Trailblazers, said after scoring 22 points, but just six in the last 14:08. 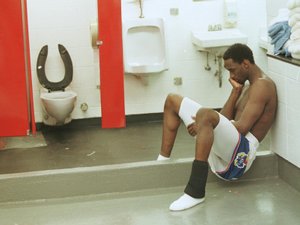 KU forward Lester earl mopes after the Jayhawks' second-round NCAA Tournament loss to the Rhode Island Rams on March 15, 1998. Kansas lost for the second year in a row as a No. 1 seed. The Jayhawks fell to Arizona in the Sweet 16 in 1997.

"In the tournament, everybody either plays over their heads or not up to their potential. I don't know what to say. It happened three times. Now it's happened four."

"It is unbelievable how luck is never on our side," noted shooting guard Thomas, who hit two of 13 three-pointers and scored just eight points. He currently plays pro ball in Serbia.

"We're supposed to be the good guys. Our program - we do everything by the book, and still we lose. Someday we'll get over the hump."

Down 72-68, KU still had a chance to rally past Rhode Island in the closing moments. However, Mobley hit a shot in the lane - with Pierce all over him - at 1:25. Following a Robertson miss, Mobley canned two free throws, upping the lead to 76-68, at 1:09.

"It's frustrating because I think if we played again we'd win," LaFrentz said after a game in which KU hit 42.5 percent of its shots to Rhode Island's 50 percent mark. "You've got to come with your A-game every night."

"I just cannot believe we lost," Pierce of the Boston Celtics noted in '98. "This tournament is a one-game deal. You don't show up one night, that's it. The best team doesn't always win."

Robertson had one year of eligibility remaining after that game. Pierce and LaFrentz were off to the pro ranks.

"When the careers of Paul and Raef are brought up, the fact they were not part of a Final Four or national championship is part of the hurt I'm sure they feel. We all feel the hurt."

Robertson, who like Wheeler played one game in the NBA and enjoyed success overseas, said he would never forget the Rhode Island affair.

Robertson - who prefers to concentrate on the positive - had one final request of a reporter before heading off to play with his two children.

"If in two or three years you decide to call somebody to talk about Rhode Island or Arizona ... call somebody else. I'm through talking about those games," Robertson lamented.