Josh Carter scored 16 points, and Acie Law and Antanas Kavaliauskas had 15 apiece to help the No. 13 Aggies roll to a 97-58 victory over Jacksonville on Saturday night.

Joseph Jones had 14 points and Marlon Pompey added 11 for the Aggies (9-2), whose wins have all come at home this season. Texas A&M has won 14 straight games at Reed Arena dating to last season, winning by an average of 29 points at home this season.

Texas A&M's two losses were on the road to then-No. 9 LSU and No. 1 UCLA last week. Its next game is Friday at Auburn.

"My freshman year, I don't know if we anticipated to win, but now we know that this is our court and no one should go on this court and beat us," said Pompey, a senior.

The Aggies are 41-4 at home during the regular season in coach Billy Gillispie's three seasons. The Aggies were 40-41 in the first seven years at Reed Arena.

Syracuse, N.Y. - Demetris Nichols matched his career high for the second straight game, scoring 28 points, including 10 straight in the first 2:31 of the second half, as the Orange beat the Bears.

It was the first meeting between Syracuse (9-2) and Baylor (6-3), which lost for the 23rd straight time to a ranked team.

Darryl Watkins had a career-high 15 points and pulled down eight rebounds for Syracuse.

Freshman Tweety Carter led the Bears with a season-high 31 points.

North Little Rock, Ark. - Bob Knight moved within one win of Dean Smith's Division I coaching record when the Red Raiders went on an early 18-0 run en route to the victory. 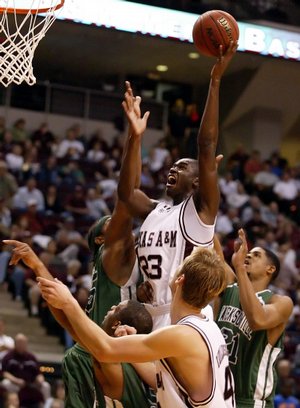 Knight has 878 victories and can tie Smith's mark when Texas Tech hosts Bucknell next Saturday. The Red Raiders (9-3) play their next four games at home.

Jarrius Jackson scored 16 of his 17 points in the first half as Texas Tech took a 35-22 lead. The Razorbacks cut their deficit to eight several times in the second half, but the Red Raiders held on.

Barnes is the 25th active Division I coach to reach the 400-win milestone and did it in his 20th season, his ninth with Texas (7-2).

Justin Mason added 18 points for the Longhorns, who scored at least 90 for the fifth time this season.

Des Moines, Iowa - Will Franklin scored a career-high 26 points, and Matt Salley added career bests of 17 points and 10 rebounds to lead the Braves in the Cyclone Capital Classic.

Jeremy Crouch chipped in 11 points for Bradley (7-3), which won its second straight following a three-game skid.