Mo is ready to go.

Judging by the 2000 Olympic 100-meter champ's reaction to a reporter's question Thursday, the 79th edition of the Kansas Relays might be more personal for Maurice Greene than past meets.

The Kansas City, Kan., native whooped and hollered when informed of comments from rival and current Olympic 100-meter champ Justin Gatlin's coach earlier in the week.

"H.S.I. (Greene's 400-meter Relay team) is always competitive, but with my four, I don't think it will be a good match," Sprint Capitol coach Trevor Graham told 6News on Tuesday. "So we're pretty much going against the clock."

Don't tell that to the 31-year-old Greene, who might be 12 years older than Gatlin, but whose competitive juices certainly haven't slowed as he responded to Graham's revelation by jumping up and down and proclaiming that Memorial Stadium was his house.

No one was more excited to learn of the smack talk than meet director Tim Weaver, who had publicized the Invitational 400 Relay race like a prize fight.

"I'm momentarily speechless," said a smiling Weaver. "One thing I do know is that with each passing day the excitement and entertainment value of the Relays is growing bigger and bigger. These athletes are passionate about putting on a show for the fans." 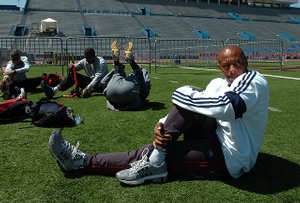 Earlier in the day, Greene said as much in an exclusive interview with the Journal-World and 6News, but the three-time 100-meter world champion was more subdued about squaring off against Gatlin in the highlight of the GoldZone portion of the Relays at 5 p.m. Saturday.

"We plan on coming out here, having a lot of fun and putting on a great show for the fans," said Greene, who will be taking on Gatlin for the first time this season. "It's always a lot of fun to come back home and let the fans here, where I grew up and have been running all my young life, see me compete and have fun."

Greene, who took Olympic bronze in Athens in 2000, said despite rumors that might suggest otherwise, he'd continue to run as long as he was having fun.

"Who knows what this will be," he said, asked if this season would be his last. "As long as I feel like I can keep competing, as long as I'm still enjoying myself and can have fun, I'll keep going."

Greene said that events like the Kansas Relays could help keep track and field going in the United States for quite some time.

"You think track and field is dead, but when you get 24,000 people into a stadium, you feel it ain't dead," said Greene who competed in the first GoldZone last year, which attracted the second largest crowd in Relays history. "The fans just have to have a place to go to watch us. You give us the place, and we'll come, and the fans will come out."

Weaver, who hopes to reach his goal of 30,000 fans in the stands Saturday, might have set that mark too low, especially since at least two elite athletes - who were scheduled just to stretch their legs Thursday - stretched their mouths instead.

"As of right now, I'm just going to run the relay," Greene said with a smirk. "But I might wake up tomorrow and be like: 'Let me go on and run the 100 meters.' We'll see what happens."