And as his rock has rolled down the 2006 hill, it has collected admirers from coast to coast along the way.

Take Dean Stotz, a Stanford assistant for the past 30 years. Ever since Czyz pitched brilliantly against the more talented Cardinal earlier this season, Stotz has hit the Internet regularly to see how Czyz is doing. Occasionally, he'll check in with KU coach Ritch Price to talk about the KU standout closer.

"Coach Stotz paid him a great compliment," Price said. "He said, 'Ritch, the kid's the best guy in the country, and your team knows it. But more importantly than that, the team in the other dugout knows it, too.'"

It's hard to argue. Czyz has collected KU records, is leading NCAA Division I with 13 saves and has set himself up for what could be a lengthy professional career beginning this summer.

The amazing thing is, Czyz was a marginal player his freshman year at KU, a baby-faced pitcher with the unique name (pronounced Chez) and a shaky game. His earned-run average was 5.58 in 2003. Opponents hit .325 against him.

Quite simply, he couldn't be trusted in tough situations. 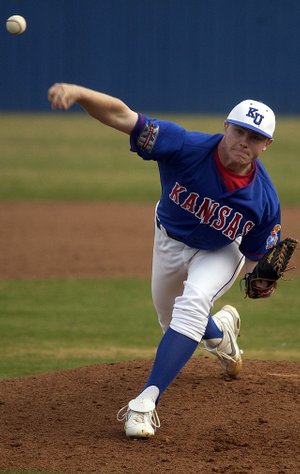 Three years later, any coaching staff in college baseball would want Czyz in their bullpen.

"He came here a student, and he's going to leave a baseball player," Price said. "If the season ended today, he'd be the national closer of the year. There's no doubt about it."

To realize the magnitude of Czyz's accomplishments, first you must learn where he has been.

Rewind to 2003. Czyz was a 19-year old freshman on the Jayhawk baseball team, and his season was a struggle. His weekend work was rare. His fastball didn't have the pop it needed. He was consistently inconsistent.

The low point came on a chilly afternoon in April. One day after KU's basketball team lost in the national-championship game to Syracuse, the Jayhawk baseball team was playing a rather meaningless midweek game against Baker University, an NAIA school down the road in Baldwin.

Czyz made the start and was knocked out by the second inning. His fastball was meat. His morale was toast. After five runs, six hits and only six outs, his second loss of the year was in the books. It remains the only KU loss to an NAIA school in the last seven years.

"In all reality, when I got here his freshman year, he did not belong at the University of Kansas," Price said. "He should've gone to junior college first. His velocity wasn't good enough, and his stuff wasn't good enough to pitch in the Big 12 as a freshman."

But deep down, Czyz still had what it took, and former KU pitching coach Steve Abney looked past all the question marks and saw promise where no one else could.

Abney then did what any coach would do. He was in Czyz's face nonstop - never letting the freshman give anything less than his best effort. Czyz couldn't afford to.

"Coach Abney definitely has a reputation for turning you into a (jerk) on the mound," Czyz said. "He did a great job with me and instilled some things in me that I'm not going to forget. He definitely was a good coach - a good, hard coach."

It was tough love, but slowly, Czyz's shell hardened a little more each time he stepped on the mound. An attitude developed. A baseball player was about to be born.

That's when Czyz shut the door on Missouri for his first collegiate save in a 5-4 Jayhawk victory at the end of his sophomore year. Something about it had Czyz finally feeling like he belonged at Kansas.

"As soon as I started closing, I knew that was something I wanted to do," Czyz said. "Being at the end of the game was just something special. It was perfect for me."

Czyz officially assumed the role for his junior season, and that's where he started to break through. His fastball reached into the 90 mph range. His slider complemented it perfectly. His approach was ideal. He had 10 saves as a junior and set the table for a special senior season.

Price credits it to one thing - Czyz tried harder than anybody else.

"The kid has incredible makeup, and with that makeup comes incredible work ethic," Price said. "He's worked hard in the weight room. He's worked hard on conditioning. He's improved his mechanics. He does his long-toss program religiously. He's done everything it takes."

Czyz's fastball now creeps up toward 94 mph. But with college players swinging aluminum sticks, it takes more than heat to rack up a 5-0 record, 13 saves and a 1.30 ERA playing one of the toughest schedules in the nation.

"He's not just a guy with a really good arm that's a thrower. Those guys get hit," Price said. "He locates his fastball down, and he pitches on both sides of the plate. That's very important because that allows him to go to his slider to finish hitters."

Strategy only goes so far, though. Czyz gives more credit to the newfound attitude Abney pounded in him. The word Czyz uses to describe himself between the lines can't be printed.

"It's a cockiness and an arrogance that you have to take out on that mound," Czyz said. "If you don't have your greatest stuff against a hitter, you have to strike fear in his eyes and let him know that you're going to dominate him. That's what it's all about."

And the future will tell how far the swagger takes him. Price expects Czyz to be selected in the first 10 rounds of the Major League Baseball draft in June. He'll also get serious consideration to be the first KU first-team All-American since Josh Kliner in 1996.

"He's the product of hard work and determination and desire," Price said. "Donny was a self-made player."

One that came to Kansas a blank canvas - and will leave a masterpiece.