Dubbed "The Golden Boy" by his teasing Kansas University football teammates for the expectations placed on his right arm, Meier did little to disappoint in his first primetime show. Leading the first-team offense during the annual spring game at Memorial Stadium, Meier was the center of attention - and left little doubt about his ability as a Big 12 Conference quarterback.

So how shocking was it to see a freshman performing so well at a high-demand position?

"I wasn't surprised at all," receiver Jonathan Lamb said. "He's been working that well this entire spring."

Meier's white team defeated the blue, 28-7, and Meier had a hand in all four touchdowns. Three were through the air, as Meier completed 16 of 28 passes for 184 yards and no interceptions. His best strike came early, when he found Derek Fine streaking up the right sideline toward the end zone and hit him with near-perfect precision - Fine had to stretch a little bit in front of him to haul it in before tumbling into the end zone.

"I know it's just spring ball," Fine said of Meier, "but it's a big move for his first year of playing and really getting into it. 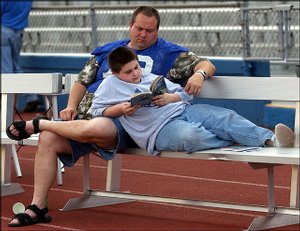 Mangino made no formal announcement as to which quarterback was the starter heading into August, prompting one media member to ask if Meier was the guy. Mangino deadpanned, "Yeah," as if to say, "Did you just see what I did?"

"I'm really pleased with Kerry," Mangino said. "I'm sure you sensed the poise he has, and the physical ability he has is hard to overlook."

Wearing a red jersey, Meier didn't have many chances to show off his scrambling, but he did pick up 36 rushing yards and a touchdown Friday. Asked if Meier could run like beloved former Jayhawk Bill Whittemore, Mangino said yes before attaching a "but" to it.

And maybe that's what made Meier look even better - he's among experienced players on the line and in the backfield. Though a couple of Meier's strikes were dropped, it went the other way, too - Fine caught two Meier balls that took great athleticism to pull down. Marcus Herford had a dazzling one-handed catch, but was ruled out of bounds.

"I had some good plays, I had some bad plays," Meier said. "But I think I had more good than bad. So as long as I improve and keep playing, I'll be just fine."

Meier was just one of several newcomers making a spring splash in front of 5,200 fans Friday.

Freshman Jake Schermer was the leading tackler with seven, and freshman linebackers like Arist Wright, Brandon Duncan and Ian Handshy all racked up a handful of stops.

In addition, junior-college transfers Blake Bueltel and Mike McCoy played extensively at cornerback, while freshman Angus Quigley had 39 yards rushing and a receiving touchdown on the night.

Kansas, overall, forecasts to be a younger team in 2006. The question is, will it matter?

First impulse is, yes. But Friday's scrimmage may have clouded the answer to even the most objective of observers.

"You have to understand that some of these young, talented kids have never played a down of college football yet," Mangino said. "We'll have to keep that in mind.

"But at the end of the day? I think we'll be OK. We're going to have a good football team."