KU coaches not certain how to handle versatile back

What would you do?

Think through it - maybe even outside the box - when examining perhaps the most intriguing question surrounding Kansas University's football team this offseason: With only so much energy in Jon Cornish, how would you divide his responsibilities on the football field?

KU coach Mark Mangino wishes he knew. But he's stuck resorting to "we'll cross that bridge when we come to it this fall" regarding the Cornish Question.

But first, some background.

Cornish is, with little argument, KU's No. 1 running back for 2006. Splitting carries with Clark Green last season, Cornish rushed for 780 yards (5.8 yards per carry) and scored 11 touchdowns on offense.

Several of his 134 carries were big breakaway plays - among them, a 58-yard run against Appalachian State, a 59-yard touchdown scamper against Texas and a memorable 72-yard dash against Nebraska that began a massive, streak-ending celebration.

Green was steady and blue-collared, but Cornish had flashes of being truly special. However, Cornish never carried the ball more than 17 times in a game last year, and Green wasn't the only reason.

"Jon's a valuable player for us," Mangino said, "both on offense and on special teams."

Kansas coaches treat special teams with unmatched seriousness, usually putting the best players on the field regardless of their other duties.

Cornish is one of KU's best special-teams players, according to several coaches. In 2005, he spent time on the kickoff-coverage, punt and punt-coverage teams and has worked out at all three this spring, too. 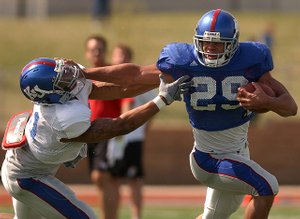 "Two weeks ago at the scrimmage in Topeka, I had to go special teams along with offense," Cornish said. "I got really tired. I love going down there at gunner (on punt coverage), but you probably won't see me as much at the other (special-teams) positions."

He pauses to think over his statement.

"At least that what I hope. I'll do anything they want me to," he said, "but I want to be fresh at running back."

So what should Kansas do? Mangino has faced similar problems before - each of the last three seasons with cornerback/wide receiver/punt-return man Charles Gordon, and in 2003 with running back/cornerback John Randle.

Neither is with the team anymore, so the Cornish Question now stands front-and-center.

It's fair to assume, though, that the more special teams Cornish plays, the less likely he could handle a huge load in the offensive backfield. And, with Green gone, there's not such a reliable safety net if Cornish is worn out.

Cornish wants to play a lot of running back - and put up big numbers doing so. Asked if 1,000 yards rushing could be a goal for 2006, Cornish wasn't impressed.

"When I talk with the O-line about it," Cornish said, "1,000 yards would be somewhat of a disappointment."

Kansas coaches are well aware of the situation facing Cornish and his talents. Problem is, they can't find an answer and stick with it.

"We've gone round and round as coaches on special teams about, 'Where can we afford to take him off to rest him?'" Mangino said. "One day, we say, 'OK, it'll be this unit,' and then we go out and practice it and don't like the way it looks, so we put him back."

One solution is for those below Cornish to step up, especially at running back. Mangino has mentioned getting fullback Brandon McAnderson more carries. Red-shirt freshman Angus Quigley is being brought along as a probable contributor for 2006 in some capacity.

But still, even that solution is a question. And the Jayhawks have enough of those when it comes to Cornish.

"If somebody could step up and we could do it by committee," Mangino said, asked if a committee approach could be implemented in '06. "But that remains to be seen."

Until then, KU coaches will keep exploring the question with no certain answer. The Cornish Question.

So, what would you do?

¢ The Barmann experiment: Kansas University football coach Mark Mangino confirmed Wednesday that Adam Barmann was getting work at tight end, to go along with his quarterback repetitions.

Mangino made clear that Barmann still was a quarterback, but the work at tight end was experimental and could be ongoing.

"We're between a rock and a hard spot," Mangino said. "I think he can help us at tight end, but if we have injuries at quarterback, he's got to play quarterback.

"We want Adam to finish his career with success," Mangino added. "Whether he's at quarterback and has to do that for us, if he : gets in to help at tight end or something like that, we're going to give him that opportunity."

¢ Meier's the guy: Barmann's work elsewhere, as well as the way repetitions have been passed out this spring, makes it all but certain that Kerry Meier is the projected starting quarterback for the Jayhawks - as believed for some time, now.

Mangino said no drumroll-backed announcement will be made, but that, "I think you'll watch the game, and you'll realize who the No. 1 quarterback is going to be."

"If you want some official announcement," Mangino added with a chuckle, "I'll do it after the spring game."

"He wasn't one to talk much in the past," Cornish said, "but at this point, he's really stepped up as one of the team's leaders."