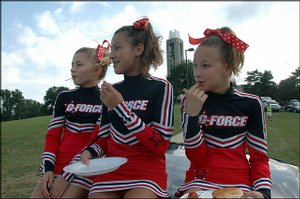 Kansas linebacker Brandon Perkins might have been dressed in red Saturday night at Memorial Stadium, but he probably had to be seeing a little bit of the hue too.

If the senior from Houston, Texas did have a chip on his shoulder though, he certainly didn't show it after his record-breaking five-sack performance in Kansas' 34-14 victory over Louisiana Tech.

"I felt pretty good today," said an excited, but subdued Perkins in the Kansas locker room. "Everything just went right."

Well at least in the second half when the Jayhawks scored 27 points in the final 22 minutes.

"We knew that we just had to stay with our game plan," said KU coach Mark Mangino, whose squad improved to 3-0 for the first time since the 1997 season.

"The kids were calm and cool. We just went out and exexcuted the way that we should in the second half."

While Perkins might have been Kansas' biggest defensive exclamation point, several other Jayhawks stood out in KU's dominant defensive effort.

"He's a tremendous player for us," Mangino said of Perkins, who broke Ron Warner's 1997 mark of four sacks. "He's seldom mentioned when people talk about our linebackers, but he's the consumate team player week and week out. He's been a force for us for the last three years."

Kansas' Nick Reid also had a banner night, recording 14 tackles, a sack, and a deflected pass.

"We were just tired of hearing that we haven't been living up to the hype," said KU corner back Charles Gordon, who scored the game's first points on his first offensive touch of the season.

KU quarterback Brian Luke hit a wide-open Gordon out in the left flats. The shifty Gordon slipped a tackle and easily made it 14 yards and into the end zone.

KU's Rodney Fowler also came up big for the Jayhawks' defense. His second interception of the game, and ensuing 18-yard return set up a Scott Webb field goal early in the fourth.

The sophomore kicker, who is 5-for-5 on the season, connected on a 24-yard field goal to increase Kansas' lead over Louisiana Tech to 34-14 with 1:37 left. Minutes earlier Webb hit a career-long 47-yard field goal.

The Jayhawks -- which came out in their alternative crimson tops (which is the first time Kansas has donned the red hue since KU's 1948 Orange Bowl game against Georgia Tech) during warm-ups -- ate up five minutes of clock on that 12-play, 50-yard scoring drive highlighted by a couple of shovel passes to Jon Cornish.

Louisiana Tech cut KU's lead to 28-14 when Matt Kubik found Freddie King for a 15-yard touchdown on fourth-and-10. The Bulldogs marched 80 yards on eight plays and took only 2:51 off the clock.

"I'm very disappointed to be honest," said Bulldog head coach Jack Bicknell whose team is 0-2, having lost 41-3 to Florida last week. "I was so sure that we were going to come out and win the game in the second half."

Instead it was the Jayhawks defense, and stellar play out of senior quarterback Brian Luke, who struggled in the first half.

KU nabbed two interceptions in the first four plays at the start of the fourth quarter, the second one came when Aqib Talib laid out for a ball that was deflected by Gordon. Talib's pick allowed Cornish to record his fifth touchdown of the season, on a one-yard run.

Cornish's pitch to the outside was set up by a 29-yard pass from Luke to Mark Simmons, who was knocked out of bounds as he was holding the ball out for the pylon.

"I told our wide receivers that this game was going to be on our shoulders and that we would have to come out and make some big plays," said Simmons, who had six catches for 106 yards. "I'm one of our senior leaders and I knew we would have to make the big plays. I made a couple of plays and our offense got rolling."

Luke hit Brian Murph for his first career touchdown, a six-yard strike in the back of the south end zone to increase KU's lead to 21-7 with 14 minutes left in the game.

"Give credit to Brian Luke," Mangino said. "That's what you want out of your quarterback.

"Things didn't go his way in the first half. He could have very easily collapsed, but he did not. He kept his poise and did a really nice job in the second half."

The Jayhawks scoring drive was set up when Perkins deflected a Bulldog pass that Theo Baines intercepted. A Louisiana Tech personal foul penalty gave Kansas a 1st-and-goal from the seven-yardline.

With 6:33 left in the third, Luke found wide out Simmons for the game's longest play, a 28-yard reception, to kick start a seven play, 63-yard drive capped off by Derek Fine's first career touchdown.

"We knew our first half wasn't our best play," said Luke, who finished 19-of-31 for 236 yards and three touchdowns, along with an interception. "Fortunately, we came out in the second half and played a lot better."

Simmons grabbed another 23 yard pass to set KU up with a first and goal at the three. Clark Green was stuffed but Luke rolled out to his right on the next play and hooked up with the wide open Fine.

Neither Kansas nor Louisiana Tech could get anything going on their first drives of the second half.

Kansas -- which was again being quarterbacked by Luke, despite his 7-o-13 effort for 60 yards in the first half -- picked up two first downs before its drive stalled out.

The Bulldogs got only three plays thanks to Perkins, who recorded his third sack of the contest.

At halftime the Jayhawks had just 73 offensive yards, compared to the Bulldogs' 130.

KU, which rushed for 200 yards in its first two games this season had just 13 yards on 13 carries in the first half.

Meanwhile Louisiana Tech quarterback Matt Kubik got the Bulldogs going. The senior was 9-13 for 58 yards and a score in the first half. But rather strangely, Bicknell re-inserted starter Donald Allen at the beginning of the second half.

Louisiana Tech freshman Anthony Harrison picked a good time to make his first career reception, grabbing a three-yard touchdown pass from Kubik in the middle of the south end zone to tie the game at 7-all with 7:24 left in the half.

Kubik, who completed his first seven passes for 50 yards, faked a hand-off and took off himself for an 11-yard scramble to set up La. Tech's scoring play.

Johnathan Holland also had a key catch and eight-yard reverse on Louisiana Tech's 11-play, 78-yard drive. The Bulldogs have nearly doubled KU in offensive production with 122 yards compared to the Jayhawks 62.

Kansas took a 7-0 lead with less than a minute left in the first quarter on Gordon's touchdown.

Kansas started the three-play drive from Louisiana Tech's 27-yard line thanks to some stellar special teams and defensive play. The Jayhawks defense nearly recorded a safety and allowed just one-yard of offense after a gang of KU players helped down Kyle Tucker's punt at the one-yardline.

Luke started KU's scoring series by hitting Brian Murph on a 13-yard screen pass for the Jayhawks first first down of the game. The very next play he found Gordon.

Marcus Hereford made a brief appearance at quarterback late in the first half, rushing three times for eight yards.

Louisiana Tech picked up two first downs on its first drive, but was forced to punt.

However, the Jayhawks gave the ball right back when Luke overthrew Murph on KU's second play from scrimmage.

Kansas got the ball back again thanks to two keys plays by its defense. Charleton Keith sacked Allen for a 12-yard loss as the Bulldogs had a 1st-and10 from KU's 10. Two plays later KU's Fowler picked off Allen's pass at the two-yardline. A La. Tech penalty set KU up with a 1st-and-10 on its own 33.

But the Jayhawks were lucky that an inadvertent pitch didn't get recovered by the Bulldogs. Another three and out, meant Louisiana Tech would take over again.

Reid and Perkins sacked Allen deep in Bulldogs territory to set up another punt. KU started its third drive from the La. Tech 46-yard line. Louisiana Tech starts its third possession from its own 19.

The Jayhawks again couldn't get anything going despite starting in Louisiana Tech territory.

Through three series Kansas' offense had only 12 yards on eight plays with an interception and fumble.

Mangino said he was pleased with how is team came out with poise and performed in the second half.

"I think we found out a lot about our team tonight," said Mangino, whose Jayhawks are off next weekend and will take on Texas Tech Oct. 1 in Lubbock, Texas. "We are a team with character, and we can play pretty good defense.

"We made plays when we had to. I think we are coming around just fine, and we will use this week to find out what we need to shore up."