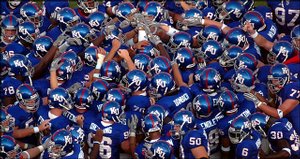 Kansas University students waved the wheat midway through the fourth quarter Saturday night at Memorial Stadium in celebration of a spectacular 29-yard touchdown run by Jon Cornish that sealed the Jayhawks 30-19 victory over Florida Atlantic.

Kansas University students waved the wheat midway through the fourth quarter Saturday night at Memorial Stadium in celebration of a spectacular 29-yard touchdown run by Jon Cornish that sealed the Jayhawks 30-19 victory over Florida Atlantic.

"I'm pleased. A victory is a victory," Mangino continued. "I saw a lot of positives things tonight that I really like. We're very close to getting things hitting on all cylinders on offense. We're close. Very encouraging."

FAU added one final touchdown with one tick on the clock when Danny Embick tossed his third touchdown pass of the game, this time a 15-yarder to Frantz Simeon.

"Who is the clock operator?" Mangino quipped. "We are at home, aren't we?"

Indeed the Owls' last score was too little too late as Cornish's score with 7:07 left combined with a two-point conversion pass from Brian Luke to Mark Simmons gave Kansas a lead it could finally hold over a pesky Owls team that led 13-12 at the end of the third quarter.

"It was a valiant effort by our guys," FAU coach Howard Schnellberger said. "We came in and played a traditional Division One team on the road, and looked pretty good doing it."

The Canadian-bred Cornish took a handoff to the right side for a marginal gain before a pair of FAU defenders seemed to have him wrapped up. Instead the six-foot, 205-pound junior escaped unscathed and scampered into the north end zone to the delight of the young Jayhawk students sitting nearby.

The Jayhawks regained a 19-13 advantage when sophomore walk-on receiver Jeff Foster made a 17-yard grab on a Brian Luke pass to the middle of the south end zone with 2:22 left in the third.

"He's a kid that came in and walked on to our program," Mangino said of the little known Foster, a transfer from Northern Iowa. "He had an impressive fall. He earned his right to be out there, and I'm glad he got some work. He is in the rotation and we will count on him as we go."

Kansas marched 63 yards on five plays, most notably with the help of a couple big runs by Clark Green, who rushed for 107 yards on 20 carries.

The score put KU back ahead on its first possesion since Florida Atlantic took a 13-12 lead when FAU quarterback Embick hit a wide open Owls running back DiIvory Edgecomb down the left sideline for a 66-yard score.

Florida Atlantic looked to be threatening minutes earlier when Embick found Casey McGahee for a 42-yard reception as the FAU receiver got behind KU safety Jerome Kemp.

McGahee then turned around and took a reverse 16-yards up a wide opening that had the KU defenders not closed quickly, the Owls would have certainly taken the lead on that play.

Embick, who was 20-of-28 for 299 yards and three touchdowns, rushed twice in a row, but his second time up the middle turned out to be costly. While being pulled down by KU's Charleton Keith Embick had the ball stripped by Jayhawk Paul Como and Kansas' Ronnie Amadi slid on the loose football.

Kansas certainly wasn't playing lights out earlier Saturday, and a bank of lights in the northwest corner of Memorial Stadium seemed to agree as it darkened part of the 40,930 fans in attendance for nearly all of the third quarter.

Minutes earlier Kansas added another bright spot to what has been a pretty dim game when Webb connected on a career-best 43-yarder to put Kansas atop Florida Atlantic 12-7 early in third quarter.

But it looked as if the Jayhawks might just tally another touchdown on the eight-play drive that covered 44 yards. However, two throws by Luke into the end zone were deflected.

Both Luke and KU starter Adam Barmann struggled in the first half.

"I'm not going to talk about the quarterback positions because I want to watch the tape," Mangino said.

"I thought Adam came in and did some good things, but he was not in rhythm. We had planned to use two quarterbacks for sure. Brian came in, and it took a little while, but he got in a rhythm."

FAU's senior signal caller racked up 299 yards on 20-of-28 passing -- including a 66-yard scoring strike to Thomas Parker at the end of the first quarter to cut Florida Atlantic's deficit to 9-7.

Barmann started the game for the Jayhawks and scored via his feet on a six-yard scamper up the middle to give KU a 9-0 lead right before FAU answered.

However, Barmann was only 5-of-11 for 56 yards and one interception through the air through the first quarter.

But the senior Luke didn't fare any better when he was inserted in the second quarter.

The 6-foot-6 Walnut Creek, Calif., native was just 3-for-8 for 48 yards, and also threwn a pick before turning things up in the second half.

The Owls' Embick connected with Parker, who burned KU standout cornerback Charles Gordon and raced into the end zone on FAU's first play from scrimmage.

That big play came only moments after Kansas took the 9-0 lead thanks to a six-yard touchdown run by Barmann. Barmann led a 12-play, 71-yard drive that took 6:22. Highlights included a 15-yard run by Green, who on the carry moved into eighth place in KU's record book for all-purpose yardage.

Gordon also put his name into the Kansas record book Saturday night becoming the Jayhawks all-time best punt returner with 608 yards. Gordon set his feat with a seven-yard punt return in the second quarter. The standout returner was stopped for short gains on two other returns in the quarter.

While Gordon said he wasn't overly whelmed with the win, the bottom line was that Kansas got a victory.

"Like coach said, based on math, there are a lot of college games today," Gordon said. "Fifty percent lost, fifty percent won. And we are a part of the 50 that won. It's important to get off on that good note and carry the momentum on to next week."

The Jayhawks got on the scoreboard first thanks to a safety by senior linebacker Brandon Perkins, who wrapped up Embick in the end zone. The FAU quarterback threw at the feet of a nearby receiver but the referees ruled he was down, thus the two-points.