"I love to attack," said Gault, a junior from Spring Hill. "That's my style."

In the 104th minute, Gault drilled a pass from Caroline Smith into net from about 15 yards out to end the marathon.

"No one was in front of me," Gault recalled, "and I yelled as loud as I could to Caroline."

Smith heard her loud and clear and saw her streaking unguarded down the right side.

"Coach (Mark Francis) had been yelling at me to take my time," Smith said, "and I saw Holly all by herself."

Thus it was fitting that KU's two most honored players would combine for the goal that would bring an end to the regular season, knock off arch-rival Mizzou and give the Jayhawks momentum going into next week's Big 12 Conference Tournament in San Antonio.

Smith, who adds to KU career scoring records every time she puts the ball between the pipes, recorded her 50th goal before three minutes had elapsed, giving KU a quick 1-0 lead. 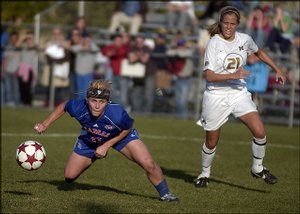 But Missouri knotted it 19 minutes later, then took a 2-1 lead less than a minute into the second half.

"We came out really, really strong," Francis said. "Then momentum shifted. When they went ahead, that put a little fire in our butts."

Junior Michelle Rasmussen lit the flame when she struck a 25-yard laser past MU goalkeeper Laura Buehrig in the 56th minute.

"That was my longest goal in college," Rasmussen said of her fourth goal of the season. "The others were when I was dribbling around in front of the goal."

The score remained 2-2 for another 49 minutes, then Gault and Smith produced with 6:13 remaining until the end of the second and last overtime.

Smith and four other seniors may have played their last home game. Then again, the Jayhawks could be awarded a home game in the NCAA Tournament.

"We've put in a bid to host," Francis said, "but I think it depends on how we do in the conference tournament. The win today and the win over Texas helped."

Kansas finished with a 6-3-1 league record after an 0-2-1 start -- the Jayhawks are 11-6-2 overall -- and probably will earn a high seed in the league tourney that will begin Wednesday.