Jayhawks limited to less than 100 yards of total offense 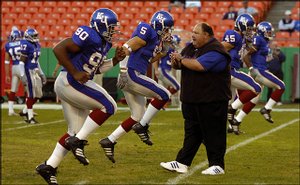 It was the same story as last weekend's Sunflower Showdown for the Jayhawks. Kansas' defense picked up, but KU's offense let down.

The end result was a 19-3 loss to recent powerhouse Oklahoma in a nationally televised game the Jayhawks still had a shot to win in the fourth quarter.

"This was probably the most disappointing offensive performance I've been around in a long time," said KU coach Mark Mangino, whose 3-3 squad dropped its third-straight Big 12 Conference game.

Then again Mangino wasn't around to see the Jayhawks when they were even worse.

That came on Nov. 10, 2001. Interim head coach Tom Hayes got a good luck at the Longhorns that day, because Texas outgained Kansas 606 yards to 67. KU managed to get past midfield just once.

Kansas wasn't quite that bad against the Sooners Saturday.

But things definitely weren't rosey either.

The Jayhawks gained just 97 yards of total offense. Kansas had only six first downs (one less than that Texas game). In fact KU had 34 more penalty yards than rushing yards.

"The responsibility is mine," Mangino said of the offensive woes. "The blame is on my doorstep, and rightfully so. I have got to get this offense going."

Still Kansas had an opportunity to defeat a Sooner squad that still had some players that played for the national title last season.

Thanks mostly to another stellar defensive performance from the Jayhawks.

"Our defense played great," Mangino gushed. "Any time you play Oklahoma this tough, you should come away with a win. But we weren't able to do that."

Much like last week in Manhattan, KU's defense all but pitched a shutout. Finally Oklahoma, which had the ball 15 minutes more than Kansas, was able to get on the scoreboard when quarterback Rhett Bomar found Malcolm Kelly for a 25-yard touchdown with just over 10 minutes remaining in the game.

"We're pleased to win coming up here away from home," OU coach Bob Stoops said. "Kansas is a much improved football team and they have an excellant defense."

But yet again that was not enough Saturday night.

Oklahoma doubled its total offensive yardage in the third quarter, but couldn't find the end zone thanks in part to two interceptions by Charles Gordon.

Neither KU nor OU did much offensively speaking in the first half. The two teams combined for a whopping 168 yards of offense, 34 of which has come via the ground.

Kansas was probably lucky that things are not worse on the scoreboard, considering that OU kicker Garrett Hartley missed two field goals in the second half.

Or the fact that KU quarterback Brian Luke had two of his first four passes picked off -- including one that OU's D.J. Wolfe returned 65 yards for a touchdown.

Luke's next pass, some nine seconds later, was also picked off as Sooner Clint Ingram intercepted a tipped ball.

OU kicker Garrett Hartley connected on a 40-yard field goal to give the Sooners their 10-0 lead.

But Kansas' defense stepped it up from there.

Kansas linebacker Nick Reid's sack of of OU quaterback Rhett Bomar late in the first half tied Reid with former Jayhawk Willie Pless for career tackles for loss at 41.

Reid's big play was followed by another big play by Charles Gordon, who returned the Sooners ensuing punt 34 yards to the Oklahoma 31-yard line. The Jayhawks couldn't take advantage though and turned the ball over on downs when Scott Webb's 41-yard field goal attempt failed.

Kansas might have had a shot to cut into OU's lead even more but an apparrent fake field goal in the second quarter was quickly subdued by the Sooners.

Tonight's contest, which is the 99th meeting between the two schools, is being televised nationally by TBS (Sunflower Broadband Ch. 10).

Kansas is coming off a disappointing 12-3 setback to Kansas State in the Sunflower Showdown, in which KU's defense limited the Wildcats to a season-low 35 rushing yards, but the Jayhawks had their own struggles on offense.

Oklahoma also suffered a loss to a rival last weekend when No. 2 Texas knocked out the Sooners 45-12 in the Red River Shootout. Standout running back Adrian Peterson had only 10 yards on just three carries last week because of a sprained ankle.

Temperature at game time was 72-degrees under clear skies with winds at 7 mph from the east. Oklahoma won the toss and elected to defer. Kansas will receive and defend the west goal.