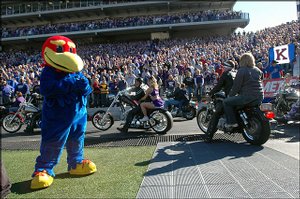 Saturday's Sunflower Showdown certainly was different than the last dozen or so, but the outcome wasn't.

Manhattan — Saturday's Sunflower Showdown certainly was different than the last dozen or so, but the outcome wasn't.

Kansas State, thanks to a fourth-quarter touchdown and safety, came back to defeat in-state rival Kansas University, 12-3, in front of nearly 50,000 at KSU Stadium.

"It was a hard fought game, a physical, tough football game," Kansas coach Mark Mangino said. "They made the plays when they needed to win the game."

Indeed Kansas didn't, not that the Jayhawks defense didn't give KU's offense every opportunity too.

Kansas defense held K-State to 35 rushing yards and one lone touchdown despite the fact that the Wildcats held the ball nearly 16 more minutes than Kansas.

Except on the one drive that counted the most.

Locked up in a three-all tie with a little more than a quarter to go, KSU's Allan Evridge led a 10-play, 75-yard scoring drive that ended with his eight-yard touchdown pass to wide out Jordy Nelson.

"I think Allan did a great job. I feel sorry for him because he's going to be extremely sore tomorrow," said KSU offensive lineman Jeromey Clary of Evridge, who took several big hits from KU defenders -- including having to be taken out of the game briefly after Nick Reid whalloped him on a roughing the passer call.

Just when things seemed to be changing for Kansas in the fourth quarter of the Sunflower Showdone, KU quarterbacks Adam Barmann and Brian Luke both fumbled on a big plays.

Luke lost the ball out of the back of his own end zone as KU faced a first and goal from the one with less than four minutes left.

Barmann fumbled on a big third down at the KSU 15-yard line with 9:52 left.

Kansas State's Jordy Nelson caught an eight-yard touchdown pass from Allan Evridge with 14:55 left in the game. The Wildcats drove 75 yards on 10 plays on the most sustained drive by either team in the game. Evridge was five-for-five for 51 yards on the drive.

Kansas' Brian Luke was stuffed on fourth-and-one at the KSU 35-yard line, but the Wildcats went three-and-out.

Kansas State's Jeff Snodgrass connected on a 38-yard field goal with 10:54 left in the third to tie the game at 3-all. A Jon Cornish fumble was picked up by Ted Sims at the KU 14-yard line.

Kansas State starts its first drive of the second half on its own 32 after a 17-yard return by Carlos Alsup. KSU is being quarterbacked again by Allan Evridge.

In a half where it appeared neither team would score, Kansas University kicker Scott Webb booted a 28-yard field goal with 3:48 in the half to break the stalemate.

Both squads' defense has controlled the momentum. The Jayhawks have limited Kansas State to just six yards rushing and only 69 total yards of offense.

Kansas, which has used both Adam Barmann and Brian Luke, has amassed 118 yards.

Kansas' Charles Gordon lost six yards when he was backed up on a deep punt, but a face mask penalty gave Kansas a first and 10 on its own 37-yard line. Brian Luke found Mark Simmons open to the outside after a play fake to Jon Cornish. Simmons had the longest play of the game when he jaunted 50 yards down field. Two runs and a misfire by Luke set up a 28-yard field goal by Scott Webb.

Jon Cornish broke off a 19-yard run. Brian Luke followed with a long bootleg too, but a holding penalty negated the senior's big gain. An incomplete pass to Derek Fine followed as did a Kyle Tucker punt into the end zone. K-State has the ball first-and-20 with 6:59 left.

K-State picked up three first downs on its first drive of the second quarter thanks to two catches by Jermaine Moreira and a 10-yard run by Allan Evridge. But big penalites, which set up a fourth-and-40 negated the Wildcats momentum. Kansas' Mark Simmons fumbled the ensuing punt but a Jayhawk got the ball at the bottom of the pile. Kansas will start its second drive of the second quarter at its own 37-yard line with 9:06 left. KU's is now being quarterback by Brian Luke.

After fumbling his first punt, Kansas' Charles Gordon handled and even harder ball in K-State territory his second go-round. The KU junior found a seam down the left sideline, going 54 yards before finally being puylled down by a KSU defender at the 16-yard line.

Jon Cornish gained three yards on first down, but lossed four on second down. Another K-State penalty, the Wildcats have 50 yards in penalties. Adam Barmann completed a pass to Brian Murph out of bounds, but a face mask penalty moved the ball back to the 27-yard line where Kansas had a third and 21. But a shovel pass to Clark Green went no where. Scott Webb's 46-yard field goal attempt was blocked.

The Jayhawks defense has been dominant so far, forcing the Wildcats to punt once again. Tim Allen and Brandon Perkins pressured new KSU quarterback Allen Everidge.

Kansas got the ball back when linebacker Nick Reid came up with his first interception of the season and took it deep into Wildcat territory.

But on a third and seven from the 36-yard line, Adam Barmann under threw an open Mark Simmons who had beat his defender but had to come back for the ball.

KU's Kyle Tucker punted the ball throught the end zone and K-State will take over at its own 20 with 7:03 left in the first quarter. The Wildcats made a substitution of their own on the drive bringing in redshirt freshman quarterback Allan Everidge to take over for Allen Webb.

Jayhawk Charles Gordon mishandled a punt after Kansas State was held to three-and-out on its first possession. The ball richocheted off Gordon's chest and Yamon Figures fell on the loose football.

KU stopped KSU behind the line of scrimmage on the Wildcats first two plays, before giving up a short gain on third and forcing the punt.

Kansas couldn't take advantage of two K-State personal fouls on its first drive. The Jayhawks turned the ball over on downs after Adam Barmann completed a short pass to Marcus Henry on fourth and 12 at the KSU's 29-yard line.

After a couple of minutes of argument from both Bill Snyder and KU coach Mark Mangino, the Jayhawks took the kickoff after deferring the coin toss. Kansas State wanted the wind and boomed a long ball that KU's Greag Heaggans appearing in his first game downed in the end zone.

Kansas University's football team travels to Manhattan today to take on Kansas State at 11:10 a.m. in the 103rd Sunflower Showdown.

Last year Kansas broke its 11-year losing streak to Kansas State when it reclaimed the Governor's Cup with a 31-28 victory over KSU at Memorial Stadium. But the Jayhawks have not won back-to-back in-state contests since 1989-90.

Both teams are coming off their first losses of the season last weekend. Kansas dropped a 30-17 contest to No. 16-ranked Texas Tech. K-State fell 43-21 to Oklahoma in Norman, Okla.

Today's contest will be televised to nearly 65 million households via Fox Sports Net, including access on both coasts.

Saturday's match-up marks the first time since the 1998 Showdown that the game is being telecast as part of the Big 12's weekly television package.

The temperature at Wagner Field is 51-degrees under sunny skies with a 12 mph wind blowing from the southeast.

Kansas once again won the coin toss and elected to defer until the second half. But both Bill Snyder and Mark Mangino argued with officials and K-State will now kick off with the wind.